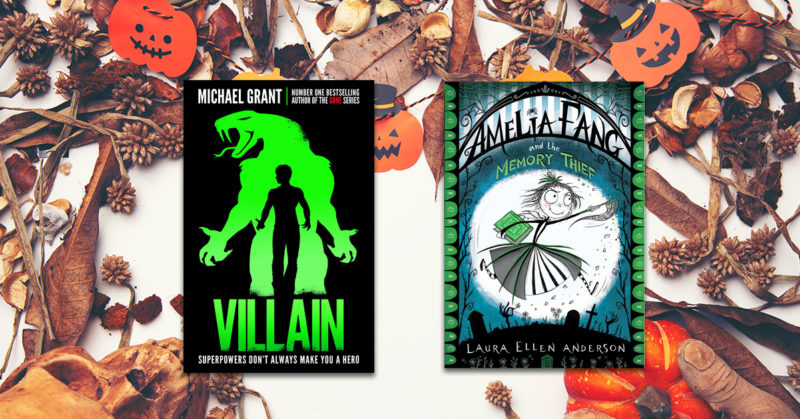 As it’s Halloween, we decided to round up five spooky books from the Farshore bookshelves to appeal to readers who enjoy things that go bump in the night.

Amelia Fang and the Memory Thief

We kick things off with Amelia Fang, the coolest vampire in town.

Amelia and her friends are taking part in a competition to visit Pumpkin Paradise Park – the most bloodcurdingly brilliant theme park ever! All they have to do is sell as many cookies as possible.

But the creatures of Nocturnia have begun to act very strangely . . . No one can seem to remember anything – including their own names or even Amelia’s big birthnight party!

Where have everyone’s memories gone? And how can Amelia save them when they have all forgotten who she is?

Amelia Fang and the Memory Thief was published this month. Check out our quiz to see which Amelia Fang character you are.

Little Monster and the Spooky Party

Next is a great spooky book for little fingers.

When an invitation to a spooky party arrives on the doormat, Little Monster is very excited.

In Little Monster and the Spooky Party, you can lift the flaps to help him to discover yummy (and yucky!) treats in the kitchen, find his friends in a game of hide-and-shriek, and discover who could be underneath an enormous ghost costume.

Mr Happy is a vampire, Little Miss Magic is a witch, but who is the mysterious ghost? Find out in Mr. Men Halloween Party!

The perfect Halloween treat for children aged 2 and up, this colourful Mr Men book comes complete with a fluorescent cover finish!

Midnight for Charlie Bone features classic magic and mystery from one of Britain’s best-loved authors of fantasy adventure. It’s perfect for fans of Harry Potter, Cornelia Funke’s Inkheart and Shane Hegarty’s Darkmouth, aged nine and up.

Finally, you could satisfy a craving for horror in the terrifying new instalment of Michael Grant’s sequel to the bestselling GONE series.

Dillon Poe wanted to be a comedian once . . . but everyone made fun of him. Dillon the loser. Dillon the freak. Now he can control anyone with the power of his voice and he’s preparing to send thousands to their deaths. Who’s laughing now?

Dekka, Shade, Cruz, Malik, Armo and a new mutant with unmatched powers are all that stand in Dillon’s way.

Villain is out now and follows 2017’s monster hit… Monster.