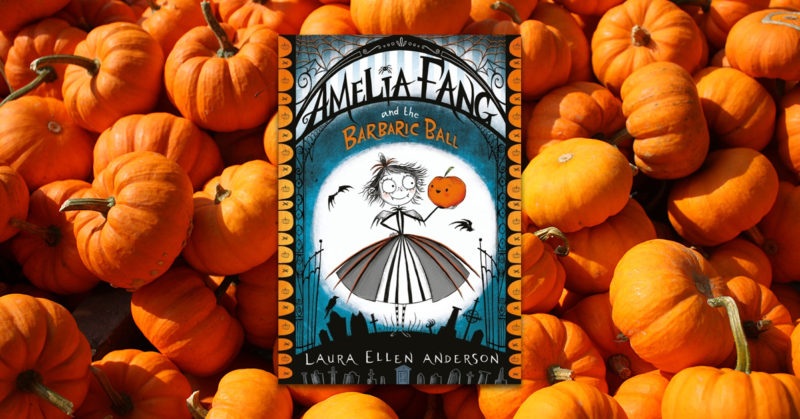 As it’s Halloween, we decided to round up five spooky books from the Farshore bookshelves to appeal to readers who enjoy things that go bump in the night.

Little Monster and the Spooky Party

We kick things off with a great spooky book for little fingers.

When an invitation to a spooky party arrives on the doormat, Little Monster is very excited.

In Little Monster and the Spooky Party, you can lift the flaps to help him to discover yummy (and yucky!) treats in the kitchen, find his friends in a game of hide-and-shriek, and discover who could be underneath an enormous ghost costume.

Mr Happy is a vampire, Little Miss Magic is a witch, but who is the mysterious ghost? Find out in Mr. Men Halloween Party!

The perfect Halloween treat for children aged 2 and up, this colourful Mr Men book comes complete with a fluorescent cover finish!

Amelia Fang and the Barbaric Ball

Welcome to the world of Nocturnia, where darkness reigns supreme, glitter is terrifying, and unicorns are the stuff of nightmares! Amelia Fang would much rather hang out with her pet pumpkin Squashy and her friends Florence the yeti (DON’T CALL HER BEAST!) and Grimaldi the reaper than dance at her parents’ annual Barbaric Ball.

And when the King’s spoiled son Tangine captures Squashy, Amelia and her friends must escape the party to plan a daring rescue! In their race against time, they begin to realise things in Nocturnia may not be quite what they seem.

This gloriously ghostly new series from the creator of Evil Emperor Penguin is perfect for seven to nine year olds and fans of The Worst Witch and Witch Wars.

Amelia Fang and the Barbaric Ball was published in October 2017, and was Waterstones book of the month!

Midnight for Charlie Bone features classic magic and mystery from one of Britain’s best-loved authors of fantasy adventure. It’s perfect for fans of Harry Potter, Cornelia Funke’s Inkheart and Shane Hegarty’s Darkmouth, aged nine and up.

The Ghost of Grania O’Malley

Finally, you could satisfy a craving for spooky books in a mysterious tale of magic, ghosts and pirates, from a master storyteller.

Everyone knows the Big Hill is full of gold, and now the islanders are intent on cutting the top off it and making themselves rich. Jessie and Jake are determined to save the Big Hill but what can they do? A plan is needed, and fast. Could the ghost of Grania O’Malley, the pirate queen, be the answer?

The Ghost of Grania O’Malley is a gripping ghost story from former Children’s Laureate and author of War Horse, Michael Morpurgo, best for children over 10 years.