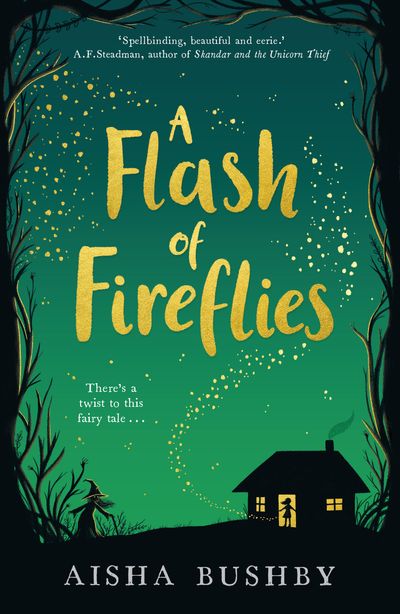 A Flash of Fireflies

A magical middle grade book about family, friendship and finding your place, with a delicate touch of magic. Perfect for 10 year olds and fans of Jacqueline Wilson, Michelle Harrison and Kiran Millwood-Hargrave and The Girl Who Speaks Bear.

Hazel’s new life in England should have been the stuff of fairy tales; after all her Great Aunt’s cottage looked just like a gingerbread house, with a magical garden and whispering fireflies promising quests and adventures.

But as Hazel struggles to deal with the challenges of the everyday world –⁠ making friends, missing her family –⁠ she
also learns that every fairy tale has a dark side. And there are terrifying creatures that lurk in the shadows . . .

Author: Aisha Bushby
Format: Digital download
Ageband: 9 to 12
Release Date: 09/06/2022
Pages: None
ISBN: 978-0-7555-0065-9
Aisha Bushby was born in Bahrain and has lived in Kuwait, England and Canada. Now she mostly lives in the worlds of her children’s books. Aisha was a contributing author in the Stripes anthology A Change is Gonna Come, alongside writers including Patrice Lawrence, Tanya Byrne and Nikesh Shukla. The anthology was awarded a YA Book Prize Special Achievement Award. Aisha’s debut novel A Pocketful of Stars was longlisted for the Carnegie medal and shortlisted for the Branford Boase award. Aisha’s books are always full of heart and have a sprinkling of magic in them.

A shot of story straight into the veins. Absolutely masterful writing that manages to be vivid, powerful and tender all at once. Aisha Bushby is a storytelling genius.’Louie Stowell, author of Loki: A Bad God’s Guide to Being Good -

'A beautiful story about defeating the demons within - full of hope, love & tenderness.’- Hannah Gold, author of The Last Bear -

‘Spellbinding, beautiful and eerie in equal measure . . . a phenomenally good book!’A.F.Steadman, author of Skandar and the Unicorn Thief -

For A Pocketful of Stars: -

'A gorgeous story of family and growing up', Cathy Cassidy -

For the Moonchild duology: -

‘Inspired by The Arabian Nights, Aisha whisks us away to a rich and exotic world  lled with magic, secrets and mystery. She transports the reader through the most beautiful and descriptive language stimulating allof our senses. We hear the danger in the storm rattling ominously in the sky above, the waves crashing against the dhow spraying us with salt and smell the aromas that Amira experiences so deeply.’Booklover Jo -

‘You’ll be swept away with Amira on a wonderful adventure . . .’The Week Junior -