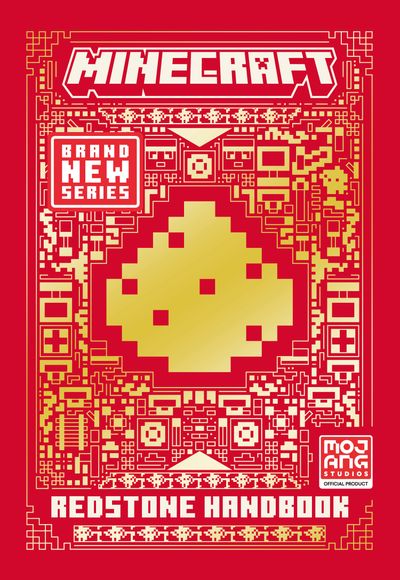 Minecraft is a multi-platform block-based gaming sensation available on Xbox, PlayStation, PC and mobile devices. Whether you’re in Creative, Survival or Hardcore Mode, the Minecraft books contain all the advice you need to survive and thrive!

This handbook will teach you everything you need to know about the electrifying possibilities of redstone.

Whether you’re playing in Survival or Creative mode, redstone is an amazing substance that will transform your gameplay. Since its arrival a huge redstone community has developed, building and sharing creations as diverse as arcade-style games, intricate traps, calculators, and even computers. The first section of this handbook gets you up to speed on the basics of redstone. The second section pushes you to use your new redstone knowledge to complete challenges, and the final section showcases some of the awesome community creations that are out there.

You’ll discover where to find redstone ore and how to mine it and all the possibilities of redstone dust. Redstone dust is really powerful stuff and is essential to almost all redstone lighting systems and circuits. Also, with step-by-step instructions to building redstone traps and arrow launchers you need never fear creepers again. Among the redstone engineering feats that feature in this handbook are the super stopwatch which can record time to a tenth of a second, faster than the blink of an eye! Or Zombie-siege, a fun combat mini-game built with redstone circuitry. These community creations will inspire you to get building with redstone.  Perfect for Minecrafters aged nine upwards.

Get wired up and go create!

Format: Hardback
Ageband: from 9
Release Date: 24/11/2022
Pages: 96
ISBN: 978-0-00-849599-2
Mojang is a games studio based in Stockholm, Sweden. Mojang was founded in 2009 by Markus “Notch” Persson and Jakob Porser. Markus Persson is also the creator of Mojang’s best-selling game to date: Minecraft.The alpha version of Minecraft was launched in 2009, and the official game went on sale in 2011. Since then over 100 million copies have been sold, across multiple platforms. It is now the second best-selling video game of all time.

These stylish, full-colour books are the perfect addition to any Minecraft fan's shelf - or a great help for someone just starting out in the game.The Independent -