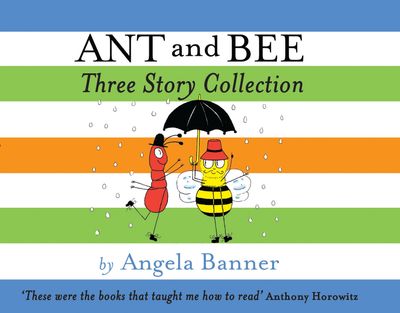 These were the books that taught me how to read’ Anthony Horowitz.

The much-loved classic series of Ant and Bee books is designed for shared reading fun!

A tiny treasury featuring the inseparable insects, Ant and Bee. Join them on three alphabetical adventures as they travel to the hottest place in the world, discover a sparkling jewel and take a flight on a magical treeThis collection introduces three-letter, four-letter and five-letter words, and includes Ant and Bee, More Ant and Bee and More and More Ant and Bee.

Ant and Bee teach children to read via word recognition and encourage story sharing with siblings and parents. Grown-ups read the black words, but the shorter, simpler red words are for young children to call out. These books are for sharing, building confidence in early readers and most of all enjoying! Perfect for young children aged 3 and up. Parents and grandparents who grew up with Ant and Bee will love sharing this nostalgic experience from the same era as Ladybird Read it Yourself.

Have you collected all of Ant and Bee’s learning adventures?

More and More Ant and Bee

Ant and Bee and the Secret

Around the World with Ant and Bee

Happy Birthday with Ant and Bee

Ant and Bee and the Rainbow

Ant and Bee and the ABC

Ant and Bee and the Kind Dog

Ant and Bee and the Doctor

Left and Right with Ant and Bee

Make a Million with Ant and Bee