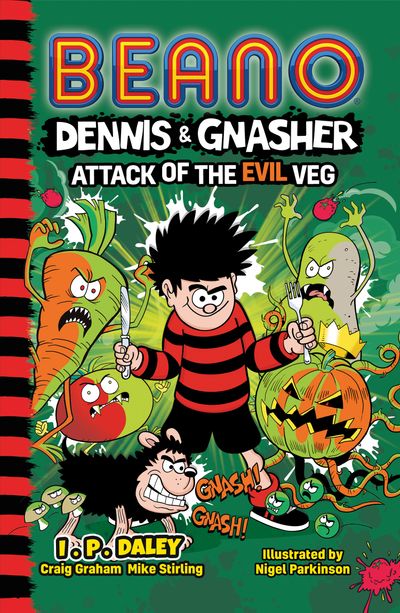 Run for your lives! A horde of evil vegetables is taking over Beanotown!

Dennis and Gnasher are back for another adventure.

An army of giant, carnivorous vegetables has sprouted to rule Beanotown! Can Dennis, Gnasher and friends root them out before they fall victim to the attack of the evil veg?!

Author: I.P. Daley
Format: ebook
Ageband: 7 to 9
Release Date: 28/04/2022
Pages: None
ISBN: 978-0-7555-0454-1
I.P. Daley is the latest author to chronicle the adventures of the fantastic Dennis and Gnasher. Having spent many years as a reporter for the Beanotown Gazette, I.P. knows her subject and is good friends with the Beano Editor. She's inspired by tricks, pranks and jokes, and even boasts a doctorate in gelotology (the science of laughter), giving her the unprecedented ability to document the dynamic duo's exploits with rib-tickling tales.I.P. is ably assisted by Craig Graham and Mike Stirling who were both born in Kirkcaldy, Fife, in the same vintage year when Dennis became the cover star of Beano. Ever since, they've been training to becomes the Brains Behind Beano Books (which is mostly making cool stuff for kids from words and funny pictures). They've both been Beano Editors, but now Craig is Managing Editor and Mike is Editorial Director (ooh, fancy!) at Beano Studios.