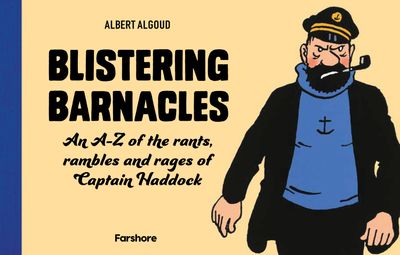 Blistering Barnacles: An A-Z of The Rants, Rambles and Rages of Captain Haddock

A sparklingly funny celebration of Hergé’s most beloved character via his legendary exclamations!

Captain Haddock made his first appearance alongside Tintin in 1941, and in the course of the 80 years that followed, has gone on to become one of Hergé best loved characters.

Clumsy, accident-prone, frequently intoxicated and almost always enraged, the Captain is perhaps best known for his colourful exclamations. ‘Blistering barnacles’ and ‘thundering typhoons’ have passed effortlessly from the pages of Hergés comics into the public consciousness.

This brand-new book explores in joyful detail the Captain’s legendary tirades – and is the perfect way to discover, or rediscover, this extraordinary character and his unforgettable adventures.

Author: Albert Algoud
Format: Hardback
Ageband: 12 to 16
Release Date: 11/11/2021
Pages: 96
ISBN: 978-0-00-849735-4
Hergé (Georges Remi) was born in Brussels in 1907. Over the course of 54 years he completed 23 albums of The Adventures of Tintin series, which is now considered to be one of the greatest, if not the greatest, comics series of all time. With translations published in over 80 languages, more than 230 million copies sold worldwide and a Hollywood movie to its name, Tintin dominates the Comics and Graphic Novels chart even today. Hergé died in 1983, leaving his 24th album, Tintin and Alph-Art, unfinished, but his hero continues to be one of the most iconic characters in both adult and children’s fiction.