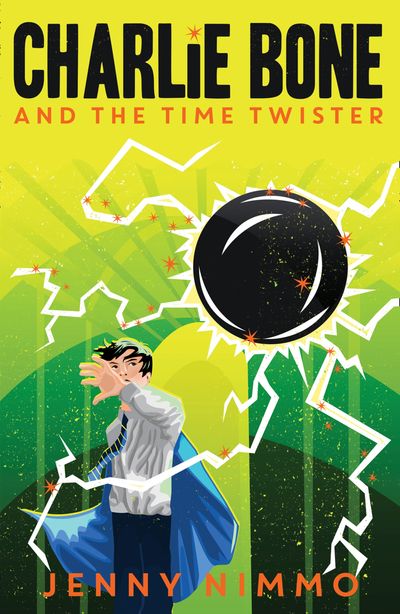 January 1916. On the coldest night in memory, Henry Yewbeam’s cousin Zeke tricks him into using the Time Twister, a beautiful marble full of shining colours that draws him into the future. And when he emerges, he meets Charlie Bone …

Have you collected all of the Charlie Bone series?

Jenny Nimmo is the acclaimed author of the Charlie Bone series. She has won several significant awards for her children’s fiction, including the Nestle Smarties Book Prize and the Tir na n-Og Welsh Arts Council award for The Snow Spider. She lives in Wales with her husband, David.

Author: Jenny Nimmo
Format: ebook
Ageband: 9 to 12
Release Date: 05/03/2012
Pages: None
ISBN: 978-1-78031-203-3
Jenny Nimmo has been an actor, researcher, floor-manager and script editor for children’s television. Her first book ‘The Bronze Trumpeter’ was published in 1975. ‘The Snow Spider’ won the Tir na N’Og award and the Smarties Grand Prix. Her most recent book, for older readers, is ‘Milo’s Wolves’. Jenny Nimmo was born in Windsor, Berkshire and now lives in Wales with her artist husband and three bi-lingual children.

'Addicts of Jenny Nimmo, of whom I'm proud to be numbered, will rush to buy The Time Twister… Classic Nimmo territory' ', Independent -

'This book is a gripping fantasy tale of mystery, suitable for children and adults. If you like Harry Potter you will love this. -

''The story is lively, accomplished and dramatic and the writing has an engaging directness and warmth'', Helen Dunmore, The Daily Telegraph -