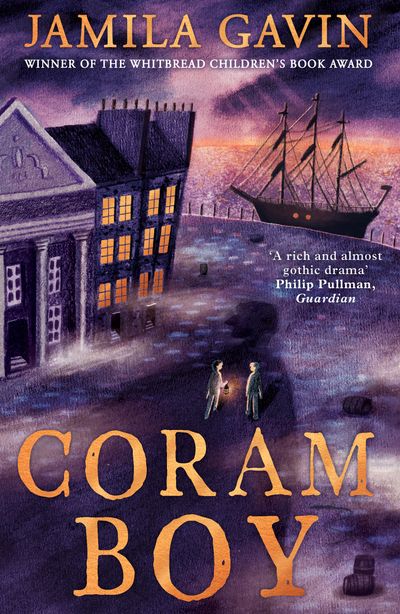 The modern classic and Whitbread Book of the Year 2000 is a haunting, thrilling and captivating story, for historical fiction fans and readers of Hilary McKay’s The Skylark’s War and Katherine Rundell’s The Good Thieves

The Coram man takes babies and money from desperate mothers, promising to deliver them safely to a Foundling Hospital in London. Instead, he murders them and buries them by the roadside, to the helpless horror of his son, Mish.

Mish saves one, Aaron, who grows up happily unaware of his history, proving himself a promising musician.  As Aaron’s new life takes him closer to his real family, the watchful Mish makes a terrible mistake, delivering Aaron and his best friend Toby back into the hands of the Coram man.

A gripping and haunting story about a dark time in British history, Coram Boy won the 2000 Whitbread Children’s Book of the Year, was shortlisted for the Carnegie Medal and has been adapted into a highly acclaimed stage play.

Author: Jamila Gavin
Format: ebook
Ageband: from 11
Release Date: 05/08/2013
Pages: None
ISBN: 978-1-78031-451-8
Jamila Gavin was born in Mussoorie, India, in the foothills of the Himalayas. With an Indian father and an English mother, she inherited two rich cultures that ran side by side throughout her life and always made her feel she belonged to both countries. Jamila’s family moved to England when she was 11. She studied music and worked for the BBC before having a family of her own and becoming a children’s writer, wanting to reflect the multicultural world in which she and her children now lived.