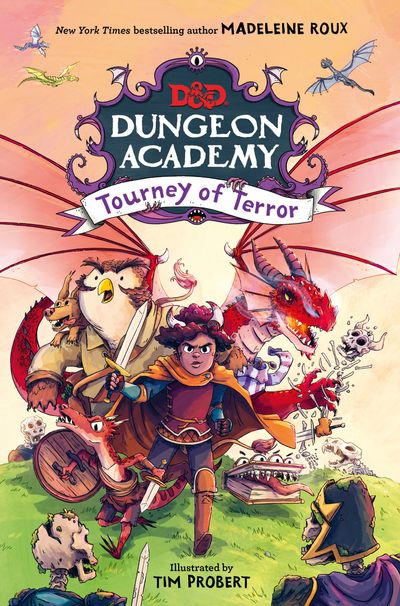 Welcome to Dungeon Academy, where monsters and creatures train for the dark world that awaits just beyond the Dungeon walls.

But Zellidora ‘Zelli’ Stormclash wasn’t a monster or a creature. She was something far worse. Zelli was a human.

Disguised as a minotaur, Zelli keeps to herself and does her work. While in class, Zelli learns of the great human adventurer, Allidora Steelstrike, who oddly resembles her. Could Zelli be – a Steelstrike?

Seeking answers to her true lineage, Zelli embarks on a dangerous adventure. But she won’t be alone. A vegan Owlbear, a cowardly Kobold and a shapeshifting Mimic who only transforms into nice things will join Zelli on her quest for the truth. And who knows, perhaps these monstrous misfits may discover truths of their own …

Author: Rob Jones
Format: ebook
Ageband: 7 to 11
Release Date: 29/09/2022
Pages: None
ISBN: 978-0-00-853103-4
Dungeons & Dragons was created in 1974, and has been the go-to tabletop role-playing game ever since. In the almost half a century since its creation, its lore has expanded to hundreds of adventures across dozens of settings, and pervaded every corner of popular culture.