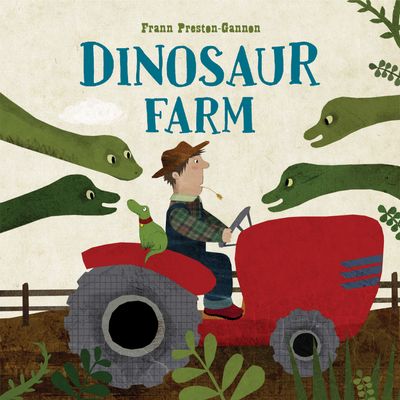 You think you’ve got it tough? Try working on a dinosaur farm!

Jack and his pet dino-dog get up early each morning to tend to the duties on the dinosaur farm. First the pterodactyl eggs need collecting. Then the triceratops need to be let out to graze. Of course the diplodocus need a good scrub after their mud bath – they do get very messy!

As the day goes on, Jack becomes more battered and bruised by his encounters – the pterodactyl were not the most co-operative when it came to collecting their eggs, the diplodocus’s bath time was a bit more exciting than it was meant to be and the boisterous tricerotops sent him flying as they rushed out of their pen! Exhausted after his daily chores, Jack collapses into bed.

But wait! Did he close the gate to the T-Rex pen?!

And if you’ve fallen in love with Dino Dog? So have we. Join him on his own adventures coming soon!

Author: Frann Preston-Gannon
Format: Paperback
Ageband: 1 to 5
Release Date: 21/03/2013
Pages: 32
ISBN: 978-1-84365-211-3
Frann Preston-Gannon is a London-based illustrator who graduated from Kingston University in 2010. In 2011 she was the UK's first recipient of a Sendak Fellowship and spent a month in residence working with the great Maurice Sendak. She was awarded a bronze in the no.8 3x3 Annual of contemporary Illustration for her unpublished children's work. Frann is the author of The Journey Home (9781843652090).