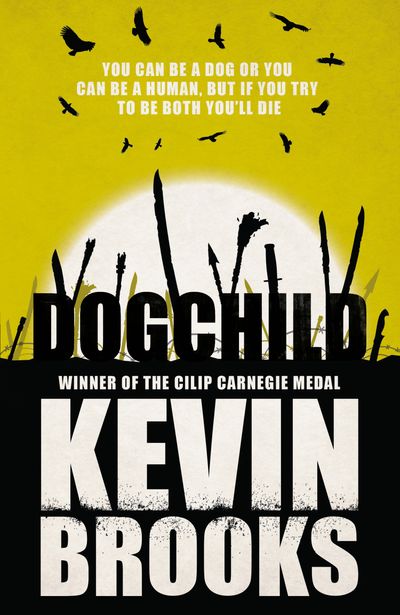 Jeet was raised by a pack of wild dogs. Recaptured and ‘rehumanised’, Jeet now lives with the last of his people in an ancient walled town in the vast expanse of the Deathlands, besieged by a much larger enemy clan. They are preparing for the final battle and it’s Jeet’s task to record the events. But Jeet is struggling to come to terms with his half-human, half-dog identity. Can the impending conflict, and his relationship with another rehumanised dogchild, shed any light on what it takes to be a survivor?

Kevin Brooks was born in Exeter and studied in Birmingham and London. He had a varied working life, with jobs in a crematorium, a zoo, a garage and a post office, before – happily – giving it all up to write books. Kevin is the author of many acclaimed award-winning young adult novels, including Martyn Pig, Lucas, Kissing The Rain, The Road of the Dead, Black Rabbit Summer and iBoy. He now lives in North Yorkshire. The Bunker Diary won the CILIP Carnegie Medal in 2014.

Author: Kevin Brooks
Format: Paperback
Ageband: from 12
Release Date: 06/09/2018
Pages: 480
ISBN: 978-1-4052-7620-7
Kevin Brooks was born in Exeter and studied in Birmingham and London. He had varied jobs in a crematorium, a zoo, a garage and a post office, before he secured his first book deal for Martyn Pig, a black comedy about a 15-year-old who decides not to tell the authorities when his alcoholic father dies accidentally. Martyn Pig was shortlisted for a 2002 Carnegie Medal, won the 2003 Branford Boase Award, and set the tone for the dark subject matter of Kevin's novels.