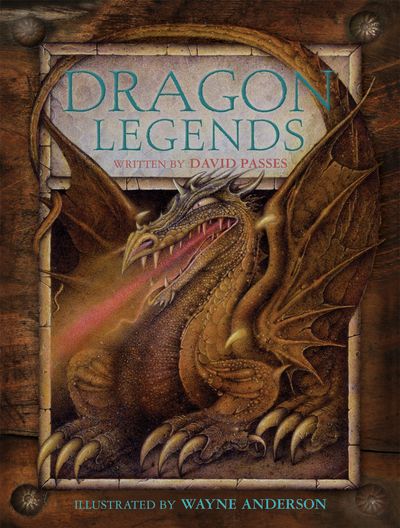 Stories about dragons from all around the world, with stunning illustrations from Wayne Anderson.

In this sumptuous anthology, David Passes invites us inside the mythical and fantastical world of dragons. He has selected a magnificent mixture of heroic myths, stories and folktales from the storytelling traditions of India, Greece, England, Wales, Sweden and China. Marduck and Tiamat – Babylon, Indra and Vritia – India, Heracles and the Hydra – Greek, Cadmus and the Golden Dragon – Greek, Beowulf and the Fire Dragon – Scandanavia, Saint George – England, The Lambton Worm – England, The Gaoliang Bridge – China, The Chinese Dragon’s Pearl – China, The Mordiford Wyvern – Wales.

Perfect for children (8+) and adults alike

Author: David Passes
Format: Paperback
Ageband: 7 to 10
Release Date: 18/07/2012
Pages: None
ISBN: 978-1-84365-212-0
David Passes was managing editor of the US magazine Elan Vital until 1976. Since returning to Britain he has studied children's writing at the University of East London. His first children's story, The Purrfect Carpet, was published by Chrysalis imprint David Bennett Books in 1993. Dragons was first published by David Bennett Books in 1993 and is being reissued on the Pavilion Children's list for the first time. Wayne Anderson has been one of Britain's leading fantasy artists since the publication of the award-winning Ratsmagic in 1976. He has produced a host of magical illustrations for books, posters, cards, films and advertising. His art is extremely collectable and much sought-after. Wayne lives and works in Leicester.