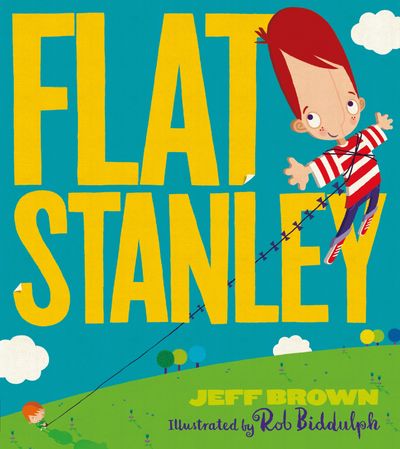 The magical and brilliantly funny adventures of Flat Stanley brought to life by bestselling illustrator Rob Biddulph in this new picture book edition.

Amazing things always happen to Stanley!
Stanley was just an ordinary boy, until a pin board fell on top of him …
Now he’s flat as a pancake! Sometimes being flat can be lots of fun – he can even fly like a kite!

But it’s not all fun and games … The sneak thieves are in the town and plotting to steal the world’s most expensive painting! Can Flat Stanley save the day?

Jeff Brown’s world-famous character continues to charm over 50 years on from publication. With shortened adapted text, this 32 page picture book is great for sharing with children aged 3 years and up and will introduce Stanley’s adventures to a whole new generation of children. Rob Biddulph’s bold and graphic illustrations reimagine the characters and their world in a fresh and engaging new way – perfect for fans new and old.

Author: Jeff Brown
Format: Paperback
Ageband: 3 to 5
Release Date: 30/05/2019
Pages: 32
ISBN: 978-1-4052-9155-2
Jeff Brown was a story editor and assistant film producer in Hollywood. He worked on at The New Yorker and the Saturday Evening Post, and his stories appeared in these magazines and many others. Jeff created the classic character Flat Stanley, whose adventures have been beloved by children around the world for more than 50 years.Rob Biddulph is a bestselling and award-winning children’s book author and illustrator. He is the official World Book Day illustrator for 2019 and 2020. Rob's bestselling book Blown Away won the Waterstones Children's Book Prize and was translated into over 13 languages. He has won and been nominated for several other awards, including the CILIP Kate Greenaway Medal, the Oscar's Book Prize, The People's Book Award and the BSC Festival of Literature Picture Book Award.