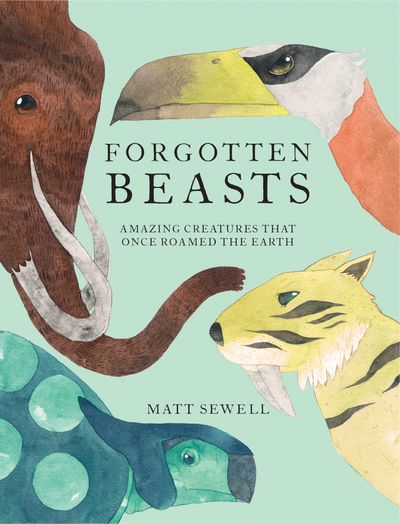 What do you know about the our planet’s strangest extinct creatures?

Less celebrated than the dinosaurs, these beasts are equally impressive. Enjoy Matt Sewell’s characteristic watercolour illustrations and witty, fascinating descriptions of these amazing creatures that once did stalk the planet.

Matt Sewell’s follow-up to the mega-hit Dinosaurs and other prehistoric creatures is a beautifully-illustrated large format look at the amazing beasts that time forgot – from the well-known, such as the sabre-toothed tiger and woolly mammoth, to more obscure monsters that walked the earth millions of years ago.

Organized chronologically, the creatures illustrated and described include:

Glyptodon – the armadillo as big as a VW Beetle car

Ornimegalonyx – the largest owl that ever existed

Deinotherium – the huge, elephant-like creature with tusks positioned on its lower jaw and curved, facing downwards

Format: Hardback
Ageband: 7 to 10
Release Date: 04/10/2018
Pages: 96
ISBN: 978-1-84365-393-6
Artist and illustrator Matt Sewell has been described as the Banksy of the bird world. Matt has illustrated for the Guardian and Barbour, painted underpasses for the RSPB, and exhibited in London, Manchester, New York, Tokyo and Paris. He is an avid ornithologist and regular contributor to the Caught by The River website (he also designed their logo). His bird books, Our Garden Birds, Our Woodland Birds, A Charm of Goldfinches and many more, have taken the world by storm. He has also illustrated numerous children's books including The Big Bird Spot, Dinosaurs and Forgotten Beasts.He lives in Shrewsbury, UK with his partner and two children.