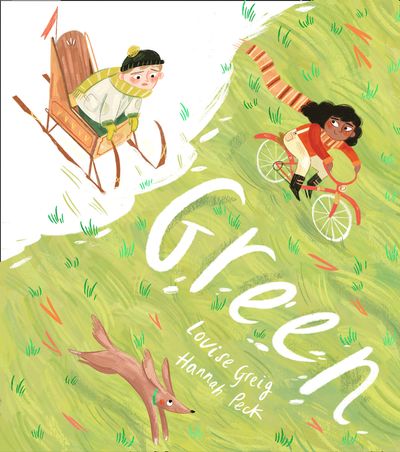 A heartwarming winter story, exploring big emotions – from the award-winning author of The Night Box

Ed is at his happiest when winter comes and Green turns to White. White means snow and playing on his fast, sleek, shiny sled.

But one day, some other sleds whizz by – faster, sleeker, shinier – making Ed’s sled seem old and dull and slow.

There is only one thing to do… Ed must build a new sled, so spectacular, it will stop everyone in their tracks.

But while he is busy working, competing to be the best, things around Ed are changing. White is disappearing and Green is returning…

Perfect for fans of Abi Elphinstone’s The Snow Dragon, Benji Davies’ The Snowflake and Lu Fraser’s The Littlest Yak.

A lyrical and reassuring introduction to the big emotion of envy – and companion title to the Greenaway-nominated Sweep.

Author: Louise Greig
Format: Paperback
Ageband: 3 to 6
Release Date: 08/07/2021
Pages: 32
ISBN: 978-1-4052-9939-8
Louise Greig is an award-winning poet and a children's picture book author. Her debut picture book for Egmont, The Night Box, illustrated by Ashling Lindsay, has been translated into 10 languages and was nominated for the 2018 Kate Greenaway Medal as well as being shortlisted for the Waterstones Children's Book Prize. Her second picture book, Sweep, illustrated by Júlia Sardà, was nominated for the 2019 Kate Greenaway Medal. She lives in Aberdeen.Hannah Peck is the bestselling illustrator of Somebody Swallowed Stanley, Butterfly Bouquet and My Friend Sleep. She lives in Brighton.

'Greig is creating books that make me wish I still had a pre-schooler to lull to sleep with her stories, and to initiate into the world of poetry with her words'', The Herald, on The Night Box -