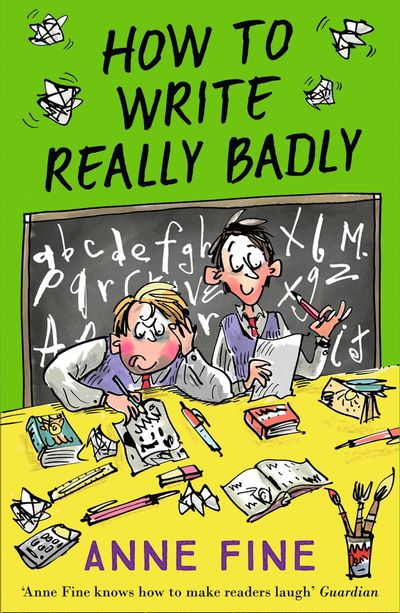 How to Write Really Badly

Chester Howard can see Joe’s project ‘How to Write Neatly’ can only be a disaster. Joe makes a terrible mess of his work, jumbling letters and numbers up together. But a project called ‘How to Write Really Badly’ – now there’s something Joe can do better than anyone else. And Chester is about to find there’s a lot more to Joe than he expected …

Author: Anne Fine
Format: Paperback
Ageband: 7 to 9
Release Date: 31/05/2018
Pages: 128
ISBN: 978-1-4052-8900-9
Anne Fine is one of the UK's best-loved authors. She was the Children's Laureate from 2001-2003 and has won both the Carnegie Medal and the Whitbread Award twice. She has published over 50 books for children, including favourites such as Bill's New Frock, I van the Terrible and The Angel of Nitshill Road. When she was young, it never occurred to Anne that she might be a writer. But one day, unable to get to the library in a snowstorm, she sat down and started to write a novel. Clearly this was the right job for her, for she has never stopped writing for more than a few weeks since.