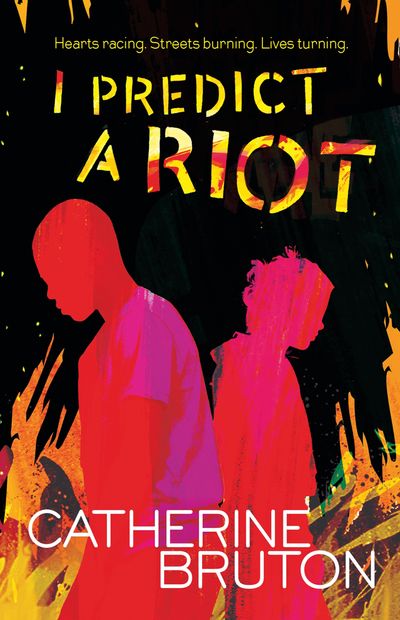 I Predict a Riot

Explosive, emotional drama from the author of We Can Be Heroes, perfect for fans of Meg Rosoff and Annabel Pitcher.

Welcome to Coronation Road – a kaleidoscope of clashing cultures and parallel lives. There’s Maggie and her politician mum in their big house. There’s Tokes and his mum in a tiny bedsit, running from trouble. And there’s the ruthless Starfish gang, breeding fear through the neighbourhood.

Amateur film-maker Maggie prefers to watch life through the lens of her camera. In Tokes, she finds a great subject for her new film. And when violence erupts, led by the Starfish gang, Maggie has the perfect backdrop. But as the world explodes around her, Maggie can’t hide behind the lens anymore …

Catherine Bruton is a major voice in young adult fiction, her prose was described by the Sunday Times as witty, wise and compelling. Readers who enjoyed Robin Talley’s Lies We Tell Ourselves will be enthralled by this novel about social and racial tensions, inspired by the London riots.

Look out for Catherine’s other books:

We Can Be Heroes

After graduating from the University of Oxford, Catherine Bruton began her career as an English teacher and later went on to write feature articles for The Times and other publications. I Predict a Riot is her third novel for Egmont, following We Can Be Heroes and Pop!, which received high acclaim. Catherine lives near Bath with her husband and two children.

Author: Catherine Bruton
Format: Digital download
Ageband: from 12
Release Date: 05/06/2014
Pages: None
ISBN: 978-1-78031-345-0
Catherine Bruton was born in the North West, where she attended the local comprehensive before graduating with a first class degree in English Literature from Oxford.In her twenties, she worked in Namibia and South Africa, teaching in bush schools and working with street children in the townships. Catherine then went on to teach at some of the top schools in London and the UK, as well as writing feature articles for ‘The Times’ and various other national magazines and newspapers.