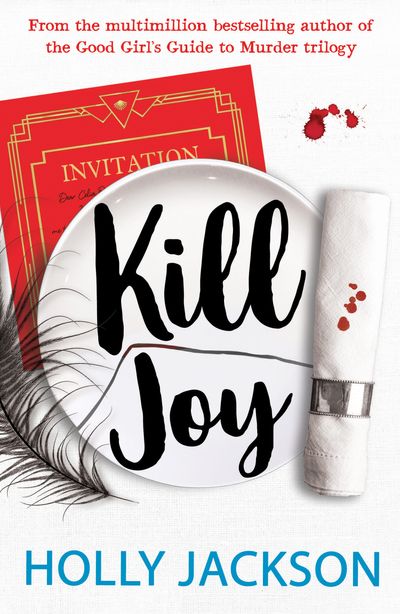 Find out where it all began for Pip in this prequel to the best-selling A Good Girl’s Guide to Murder,Good Girl, Bad Blood and As Good As Dead. Previously published in 2021 as a World Book Day title.

A GOOD GIRL’S GUIDE TO MURDER IS THE WINNER OF THE BRITISH BOOK AWARDS’ CHILDREN’S BOOK OF THE YEAR 2020, A NEW YORK TIMES BESTSELLER AND SHORTLISTED FOR THE WATERSTONES CHILDREN’S BOOK PRIZE 2020

Pippa Fitz-Amobi is not in the mood for her friend’s murder mystery party. Especially one that involves 1920’s fancy dress and pretending that their town, Little Kilton, is an island called Joy. But when the game begins, Pip finds herself drawn into the make-believe world of intrigue, deception and murder.

But as Pip plays detective, teasing out the identity of the killer clue-by-clue, the murder of the fictional Reginald Remy isn’t the only case on her mind …

Find out where it all began for Pip in this prequel to the best-selling A Good Girl’s Guide to Murder,Good Girl, Bad Blood and As Good As Dead!

Author: Holly Jackson
Format: ebook
Ageband: from 14
Release Date: 04/08/2022
Pages: None
ISBN: 978-0-00-858222-7
Holly Jackson is the bestselling author of the A Good Girl's Guide to Murder trilogy. She lives in London and aside from reading and writing, she enjoys playing video games and watching true crime documentaries so she can pretend to be a detective.You can follow Holly @HoJay92

Praise for the Good Girl’s Guide to Murder series: -

”'Jackson ensnares readers in another highly addictive web, woven from the dark shadows of small-town secrets.” - The Observer

“As Good As Dead is a phenomenal YA mystery that deserves to be one of the books of the year and provides a stellar finale to a knockout series.'Nerd Daily -

'A fiendishly-plotted mystery that kept me guessing until the very end.' - Laura Purcell, bestselling author of The Silent Companions -

'There is a lot to really enjoy in this story and there is great energy to the writing, as well as some fine characterization' - Peter James, award-winning and no.1 bestselling crime thriller author of Detective Superintendent Roy Grace series -

'Twisty, compulsive and so, so clever' - Savannah Brown, author of The Truth About Keeping Secrets -

'That ending! Pure genius' - Yasmin Rahman, author of All the Things We Never Said -

'This book was a delight from start to finish. I laughed. I cried. And I very much enjoyed attempting to solve the case with Pip (who I now want to be my best friend). I didn't guess the twist, and I don't think many people will. Holly Jackson has absolutely killed it with her debut!' - Aisha Busby, author of A Pocketful of Stars and contributor to the award-winning A Change is Gonna Come -

'Prepare to be murdered by this book. Dark, dangerous and intricately plotted - my heart literally pounded. I haven't been this addicted to anything since Serial. Holly Jackson is the next big thing, I promise' - Laura Stevens, author of The Exact Opposite of Okay -

”'As Good As Dead is a phenomenal YA mystery that deserves to be one of the books of the year and provides a stellar finale to a knockout series.” - Nerd Daily