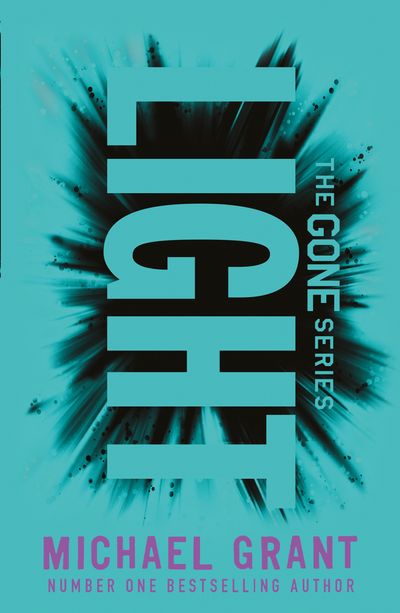 Welcome back to the FAYZ! This is Book 6 in the series that Stephen King calls a ‘driving, torrential narrative’.

All eyes are on Perdido Beach. The barrier wall is now as clear as glass and life in the FAYZ is visible for the entire outside world to see. Life inside the dome remains a constant battle and the Darkness, away from watchful eyes, grows and grows … The society that Sam and Astrid have struggled so hard to build is about to be shattered for good. It’s the end of the FAYZ. Who will survive to see the light of day? This is the nail-biting finale to the GONE saga.

Michael Grant has lived an exciting, fast-paced life. He moved in with his wife Katherine Applegate after only 24 hours. He has co-authored over 160 books but promises that everything he writes is like nothing you’ve ever read before! If the Gone series has left you hungry for more from the dark genius of YA fiction, look out for the BZRK trilogy: BZRK, BZRK Reloaded, BZRK Apocalypse and the terrifying Messenger of Fear and its sequel The Tattooed Heart.

Author: Michael Grant
Format: Paperback
Ageband: from 12
Release Date: 29/04/2021
Pages: 464
ISBN: 978-0-7555-0166-3
Michael Grant is the evil genius of Young Adult Fiction. Among his biggest fans is Stephen King who called the GONE series ‘A driving, torrential narrative’. Michael’s life has been similarly driving and torrential. He’s lived in almost 50 different homes in 14 US states, and moved in with his wife, Katherine Applegate, after knowing her less than 24 hours. Michael and Katherine were running their own cleaning business when they were working on their first book. Since trading in his marigolds, Michael has now written around 150 books (with Katherine, as himself, under pseudonyms and as a ghostwriter).He now lives in the San Francisco Bay area taking his inspiration from his charming view of Alcatraz. From across those dark waters have emerged his dystopian fantasy series, GONE, his thrilling futuristic trilogy BZRK, and the menacing Messenger of Fear.The GONE series has sold over a million copies in the UK alone, meaning that Michael has terrified a lot of people. Something he particularly likes to do. You can find him here http://www.michaelgrantbooks.co.uk and follow him on Twitter @MichaelGrantBks.

”'It's completely unpredictable - I had absolutely no idea how on earth it would end, but Grant brings things to a stunning conclusion.” - (The Bookbag)