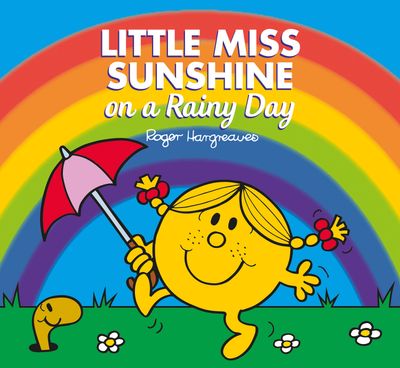 A brand new story about a Little Miss with a very sunny disposition!

Little Miss Sunshine is the sort of person who can see the good side of everything and everyone. But not all her friends are the same. Mr Grumble is the complete opposite and he grumbles from morning to night. How will Little Miss Sunshine show him that every cloud has a silver lining?

The popular Little Miss Sunshine now has a new story in a big, bright edition for you to share and enjoy!

Author: Roger Hargreaves
Format: Paperback
Ageband: from 3
Release Date: 09/06/2022
Pages: 32
ISBN: 978-0-7555-0408-4
Adam Hargreaves is the son of Roger Hargreaves who created the Mr. Men and Little Miss series. Adam was the inspiration for the series when, at the age of eight, he asked his father 'What does a tickle look like?' In response, Roger drew a figure with a round orange body and long, rubbery arms and Mr. Tickle was born. He was soon joined by Mr Greedy, Mr Happy, Mr Nosey, Mr Sneeze and Mr Bump. The books were an instant hit and Roger went on to create many more Mr Men and Little Miss characters. What Roger really wanted was to make children laugh,which is probably why his own favourite character is Mr Silly.