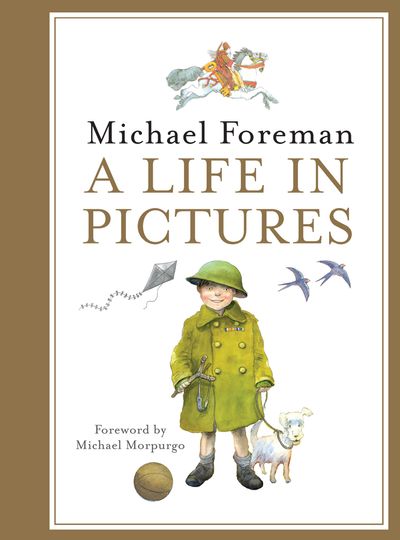 Michael Foreman: A Life in Pictures

This is a celebration of Michael’s life as a master storyteller and illustrator told through his own autobiographical tales, diary extracts, original sketches and illustrations from his award-winning publications.

“One of my earliest memories is lying on the floor in front of the kitchen fire, drawing…” Michael Foreman

During the war, paper was in short supply, but the large biscuit tins delivered to Michael’s Mum’s shop were lined with white paper. The tins were about twelve inches square, so unfolded, the paper would be four feet long. Perfect for drawings of marching soldiers and convoys of tanks, the village traffic of his childhood.

Beginning with his childhood in wartime Suffolk and his early career as a young artist, and culminating with his collaborations with world-famous authors Terry Jones, Michael Morpurgo and Quentin ‘BLOOMIN’ Blake, this book showcases his ‘greatest hits’, and reveals the places, stories and people that inspired him along the way.

Memories of Childhood (Looking through War Boy, After the War Was Over and War Game.)

‘I have been lucky with writers. None have been real trouble. Some I never met. Some I meet only after the book is finished, and some, the easiest to get along with, are the dead ones. Most become friends.’ Michael Foreman

Format: Hardback
Ageband: 7 to 9
Release Date: 26/11/2015
Pages: 192
ISBN: 978-1-84365-299-1
Michael Foreman’s numerous books for children have earned him widespread recognition as one of the world’s leading illustrators. He has regularly collaborated with Terry Jones, Michael Morpurgo and others while several of his own books are also considered modern classics. Titles include War Boy, War Game, Terry Jones's Erik the Viking and Animal Tales, Michael Morpurgo's Farm Boy and many more.