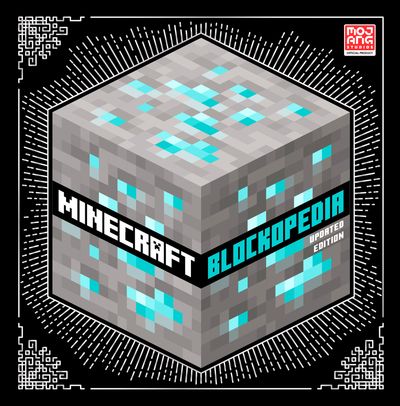 Bursting with facts on over 600 unique blocks!

Minecraft continues to grow every year and Minecraft Blockopedia: Updated Edition catalogues every single block in the game. Over 200 new blocks have been added in this completely revised edition, including those from the most recent Caves & Cliffs update.

Ever wanted to know how to make obsidian, or find out where you can mine for emeralds? Maybe you’ve wondered what you can use ancient debris or copper ore for? The answers are all contained in this comprehensive collection of blocks.

Every page has been lovingly crafted from the ground up to suitably showcase each of the blocks – from deep dives on the intricate patterns of glazed terracotta and the benefits of the beacon block to concise explanations of furnace and anvil mechanics.

This is the perfect gift for Minecraft fans of all generations, in a beautifully presented hardback edition. The original version of this title was a bestseller, shifting 200,000 copies in the UK alone.

Format: Hardback
Ageband: from 8
Release Date: 28/10/2021
Pages: 312
ISBN: 978-0-7555-0039-0
Mojang is a games studio based in Stockholm, Sweden. Mojang was founded in 2009 by Markus “Notch” Persson and Jakob Porser. Markus Persson is also the creator of Mojang’s best-selling game to date: Minecraft.The alpha version of Minecraft was launched in 2009, and the official game went on sale in 2011. Since then over 200 million copies have been sold, across multiple platforms. It is now the second best-selling video game of all time.In 2014, Mojang was bought by Microsoft. The acquisition hasn’t changed much about the company – they still release and support games on multiple platforms, including iOS, Playstation and many more, as well as Windows and Xbox. Mojang have retained their independent spirit and continue to treat their community with the respect and honesty it deserves.