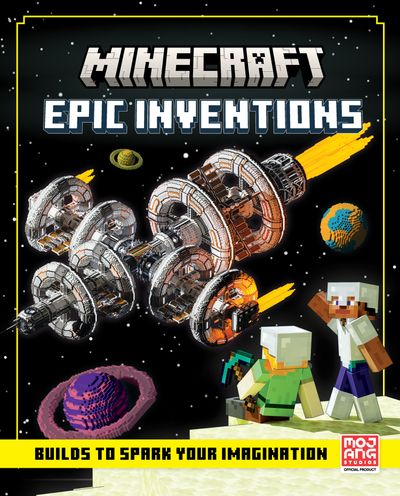 Are you a keen inventor?

Looking for inspiration for your next epic build? Then look no further!

Epic Inventions contains twelve incredible builds to inspire you to construct the most inventive builds in Minecraft. There’s an intergalactic space station, an ancient temple, a kawaii waterways course, a giant meeple bedroom, an animal sanctuary, plus many more.

Each build is presented to you by its builder – a construction expert eager to share their tips with you. As well as learning how to choose blocks and construct amazing builds, you’ll also learn some excellent pro builder tips like how to build a creeper farm.

Format: Hardback
Ageband: from 7
Release Date: 10/11/2022
Pages: 96
ISBN: 978-0-00-849601-2
Mojang is a games studio based in Stockholm, Sweden. Mojang was founded in 2009 by Markus “Notch… Persson and Jakob Porser. Markus Persson is also the creator of Mojang’s best-selling game to date: Minecraft. The alpha version of Minecraft was launched in 2009, and the official game went on sale in 2011. Since then over 100 million copies have been sold, across multiple platforms. It is now the second best-selling video game of all time. In 2014, Mojang was bought by Microsoft. The acquisition hasn’t changed much about the company – they still release and support games on multiple platforms, including iOS, Playstation and many more, as well as Windows and Xbox. Mojang plan to keep their independent spirit and continue to treat their community with the respect and honesty it deserves.