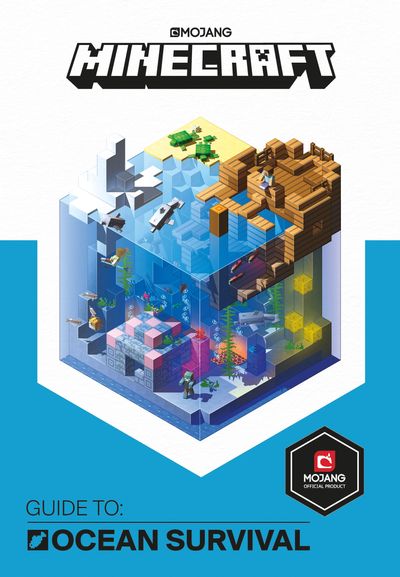 Minecraft’s oceans are teeming with colourful life and rare treasures, but new dangers lurk beneath the surface of the water and survival can prove difficult for even the bravest adventurer.

The official Minecraft Guide to Ocean Survival will teach you how to breathe underwater, find valuable sunken loot and fight off guardians and other menacing mobs of the deep.

With insider info and tips from the experts at Mojang, this is the definitive guide to underwater survival for aquatic adventurers.

Format: Hardback
Ageband: from 6
Release Date: 19/09/2019
Pages: 80
ISBN: 978-1-4052-9500-0
Mojang is a games studio based in Stockholm, Sweden. Mojang was founded in 2009 by Markus “Notch… Persson and Jakob Porser. Markus Persson is also the creator of Mojang’s best-selling game to date: Minecraft. The alpha version of Minecraft was launched in 2009, and the official game went on sale in 2011. Since then over 100 million copies have been sold, across multiple platforms. It is now the second best-selling video game of all time. In 2014, Mojang was bought by Microsoft. The acquisition hasn’t changed much about the company – they still release and support games on multiple platforms, including iOS, Playstation and many more, as well as Windows and Xbox. Mojang plan to keep their independent spirit and continue to treat their community with the respect and honesty it deserves.

These stylish, full-colour books are the perfect addition to any Minecraft fan's shelf - or a great help for someone just starting out in the game.', Games Master, 2017 -