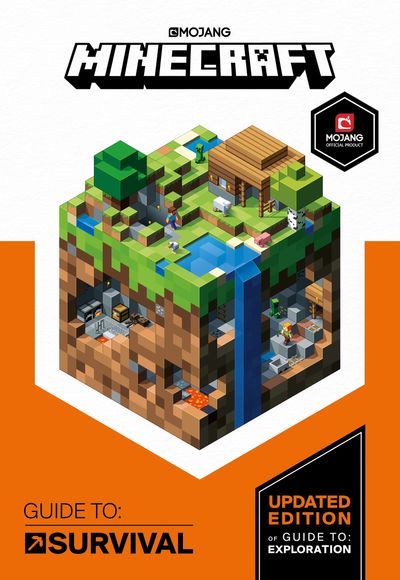 Minecraft Guide to Survival – an updated edition of Guide to Exploration – teaches you everything you need to know to stay alive in the Overworld.

The world of Minecraft is waiting to be explored. But danger lurks around every corner and survival can prove difficult for even the bravest adventurer.

The official Minecraft Guide to Survival will help you to stay alive. Learn how to find resources, craft equipment and protect yourself from hostile mobs.

With insider info and tips from the experts at Mojang, this is the definitive guide to survival for new Minecrafters.

Format: Hardback
Ageband: 11 to 16
Release Date: 05/03/2020
Pages: 96
ISBN: 978-1-4052-9650-2
Mojang is a games studio based in Stockholm, Sweden. Mojang was founded in 2009 by Markus “Notch… Persson and Jakob Porser. Markus Persson is also the creator of Mojang’s best-selling game to date: Minecraft. The alpha version of Minecraft was launched in 2009, and the official game went on sale in 2011. Since then over 100 million copies have been sold, across multiple platforms. It is now the second best-selling video game of all time. In 2014, Mojang was bought by Microsoft. The acquisition hasn’t changed much about the company – they still release and support games on multiple platforms, including iOS, Playstation and many more, as well as Windows and Xbox. Mojang plan to keep their independent spirit and continue to treat their community with the respect and honesty it deserves.