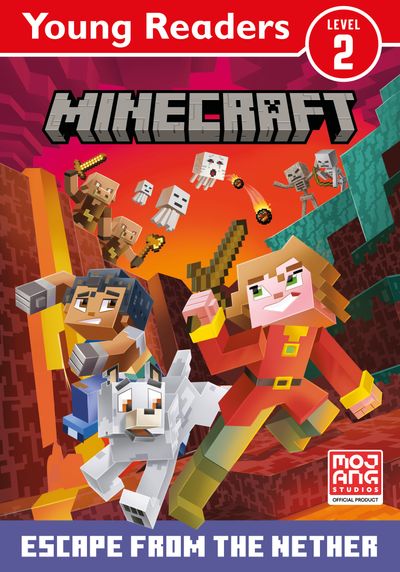 Journey into the Nether (if you dare) in this Step Into Reading Step 3 Levelled Reader, the only official levelled reader series based on Minecraft, the world’s best-selling video game!

Learn to read with the official Minecraft Young Readers! Practise your reading skills and develop your vocabulary as you read stories about your favourite game.

Minecraft® is the best-selling video game of all time! And now learning to read has never been more fun for fans of the game ages 4 to 7. They’ll get a great introduction to the game’s most mysterious biomes when two players, Emmy and Birch – and their tame wolf Byte – set out on an epic adventure into the mysterious Nether! This Step 3 Step into Reading Levelled Reader includes more than 30 full-colour stickers to add to the fun.

Step 3 readers feature engaging characters in easy-to-follow plots about popular topics for children who are ready to read on their own.

Format: Paperback
Ageband: 5 to 7
Release Date: 28/04/2022
Pages: 24
ISBN: 978-0-7555-0046-8
Mojang is a games studio based in Stockholm, Sweden. Mojang was founded in 2009 by Markus “Notch… Persson and Jakob Porser. Markus Persson is also the creator of Mojang’s best-selling game to date: Minecraft. The alpha version of Minecraft was launched in 2009, and the official game went on sale in 2011. Since then over 200 million copies have been sold, across multiple platforms. It is now the second best-selling video game of all time. In 2014, Mojang was bought by Microsoft. The acquisition hasn’t changed much about the company – they still release and support games on multiple platforms, including iOS, Playstation and many more, as well as Windows and Xbox. Mojang have retained their independent spirit and continue to treat their community with the respect and honesty it deserves. Mojang celebrated 10 years of Minecraft in 2019.