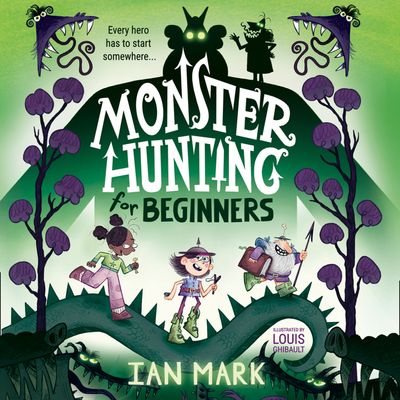 “A MAGNIFICENTLY HILARIOUS MASTERPIECE OF MONSTER PROPORTIONS. I HOWLED WITH LAUGHTER!”, JENNY PEARSON, THE SUPER MIRACULOUS JOURNEY OF FREDDIE YATES

A monstrously funny new adventure series. Readers of 8+ and fans of Mega Monster and Shrek will adore the first in the brand new fantasy series from Irish debut author, Ian Mark

Every hero has to start somewhere . . .

Monster Hunting isn’t as easy as it looks. And Jack should know. Because an ogre has just appeared in his garden and tried to EAT HIS AUNT. (She was the winner of the World’s Worst Aunt competition, but that’s Not The Point).

After (sort of accidentally) defeating the ogre, Jack finds himself apprenticed to a grumpy, 200-year-old monster hunter called Stoop and heading off to Cornwall, where more ogres are causing havoc.

All he has are his wits, his catapult and a magical – sometimes unreliable – book called Monster Hunting for Beginners.
Jack’s a bit worried he might not be the hero everyone’s waiting for. But then again, how many terrifying, bloodthirsty monsters can there really be?

A hilarious and accessible story, packed full of illustrations – that gives a twist to all your favourite fairytales and will change everything you thought you knew about monsters! Perfect for apprentice monster hunters aged 8 to 800.

Author: Ian Mark
Format: Audio-Book
Ageband: 8 to 12
Release Date: 02/09/2021
Pages: None
ISBN: 978-0-7555-0435-0
Detailed Edition: Unabridged edition
Ian Mark is an author and monster hunter who spends his time wrestling krakens, hypnotising bogeymen with an eyeball on a string of spaghetti, and writing about his adventures to entertain young monster hunters all around the world. Ian lives in Northern Ireland with his family and lots of small, furry monsters or ‘cats’.

”'Ian Mark has created a magnificently hilarious masterpiece of monster proportions. I howled with laughter! The next in the series better come out soon, or I’ll hunt him down like I might the Crusted Hairy Snot Nibbler,” - Jenny Pearson, author of The Super Miraculous Journey of Freddie Yates

”'This fantastical debut sparkles with energy and a melange of mayhem-making monsters.” - Love Reading 4 Kids