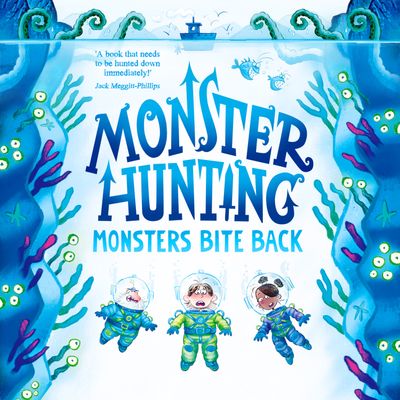 ‘A MONSTROUSLY FUNNY NEW VOICE,’ MAZ EVANS, WHO LET THE GODS OUT?

The second seriously silly adventure in the hilarious series that turns everything you thought you knew about monsters upside down!

Perfect for young monster hunters aged 8+ and fans of Sam Copeland, Jenny Pearson and How to Train Your Dragon

When the monsters start misbehaving it’s a monster hunter’s job to sort them out!

In their second adventure Jack, his best friend Nancy and Stoop (a grumpy, 200-year-old monster hunter) head up to Scotland after reports of some mysterious monsters causing chaos in an ancient abbey. And maybe they’ll even get a glimpse of Nessie! But when they get there they find some obstacles in their path – whether that’s the fog goblins, disgruntled ghosts, some very odd loch monsters and even a rival monster hunting agency.

Oh and there’s also an ancient curse that spells THE END OF THE WORLD AS WE KNOW IT! A monster hunter’s work is never done.

Author: Ian Mark
Format: Digital Audiobook
Ageband: 8 to 12
Release Date: 05/01/2023
Pages: None
ISBN: 978-0-00-850729-9
Detailed Edition: Unabridged edition
Ian Mark is an author and monster hunter who spends his time wrestling krakens, hypnotising bogeymen with an eyeball on a string of spaghetti, and writing about his adventures to entertain young monster hunters all around the world. Ian lives in Northern Ireland with his family and lots of small, furry monsters or ‘cats’.

Praise for the first book: -

”'Ian Mark has created a magnificently hilarious masterpiece of monster proportions. I howled with laughter! The next in the series better come out soon, or I’ll hunt him down like I might the Crusted Hairy Snot Nibbler,” - Jenny Pearson, author of The Super Miraculous Journey of Freddie Yates