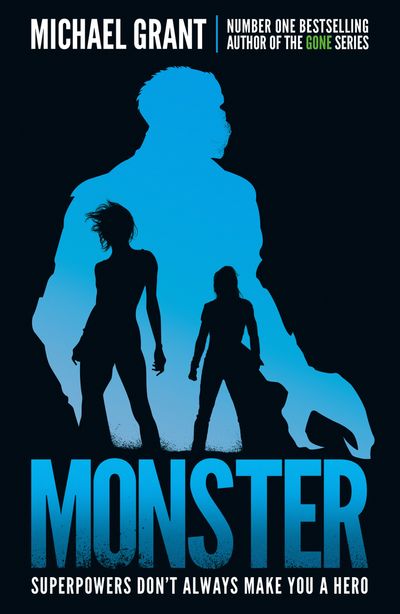 The GONE series may be over, but it’s not the end of the story …

MICHAEL GRANT’S ACTION-PACKED AND MUCH ANTICIPATED NEW BOOK, SET IN THE AFTERMATH OF THE BESTSELLING GONE SERIES.

Shade Darby witnessed events that day, with devastating consequences, and vowed never to feel that powerless again. Now, four years later, she gets her hands on a part of the meteor that began it all – and that’s when she changes.

Trouble is, Shade’s not the only one mutating, and the authorities cannot allow these superpowers to go unchecked …

First of an explosive three-book young adult series. Once again Michael Grant creates a compelling young cast of new characters for readers to love, hate and debate, as well as a host of unimaginable creatures. This happily stands alone from the GONE series, while also featuring some fan-pleasing appearances from previous FAYZ inhabitants.

Michael Grant lives in San Francisco with his wife, Katherine Applegate, and has written over 150 books – with Katherine, as himself, under pseudonyms and as a ghostwriter. He is best know for the international multi-million-selling young adult six-book GONE series: GONE, HUNGER, LIES, PLAGUE, FEAR and LIGHT.

Author: Michael Grant
Format: eBook
Ageband: from 12
Release Date: 19/10/2017
ISBN: 978-1-78031-766-3
Michael Grant is the evil genius of Young Adult Fiction. Among his biggest fans is Stephen King who called the GONE series ‘A driving, torrential narrative’. Michael has now written around 150 books (with Katherine, as himself, under pseudonyms and as a ghostwriter).He now lives in the San Francisco Bay area taking his inspiration from his charming view of Alcatraz. From across those dark waters have emerged his dystopian fantasy series, GONE, his thrilling futuristic trilogy BZRK, and the menacing Messenger of Fear. As well as reinventing history with his Front Lines series, and revisiting the world of GONE with MONSTER and VILLAIN.

The GONE series may be over, but it's not the end of the story …

MICHAEL GRANT'S ACTION-PACKED AND MUCH ANTICIPATED NEW BOOK, SET IN THE AFTERMATH OF THE BESTSELLING GONE SERIES.