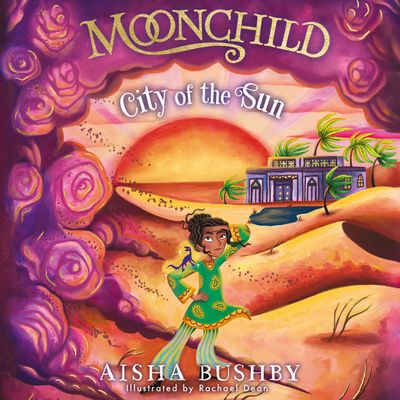 The second book in a magical middle grade adventure series, inspired by The Arabian Nights and perfect for readers of Kiran Millwood Hargrave, Michelle Harrison and Sophie McKenzie.

Farah and her lizard jinn, Layla, are travelling through a vast desert – returning to their village home after their adventures with Amira and Leo in Moonchild: Voyage of the Lost and Found. Farah is desperate to see her sister again, but then she discovers a hidden city – full of people who have concealed their magic for many years. At first Farah thinks she has found new friends, but everything is not what it seems and dark magic lies just beneath the surface …

‘A gorgeous story of friendship and growing up’ Cathy Cassidy

‘Moving and heartfelt’, Anna James, author of Pages and Co

Author: Aisha Bushby
Format: Digital Audiobook
Ageband: 9 to 12
Release Date: 05/08/2021
Pages: None
ISBN: 978-0-00-849642-5
Detailed Edition: Unabridged edition
Aisha Bushby is a writer who combines heartbreaking emotional stories and unforgettable characters with a sprinkling of magic. She was selected as one of only four previously unpublished authors in the Stripes anthology, A Change is Gonna Come, alongside writers such as Patrice Lawrence, Tanya Byrne and Nikesh Shukla. The anthology was awarded a YA Book Prize Special Achievement Award.Her debut novel, A Pocketful of Stars (2019), was nominated for the Carnegie Medal and the Branford Boase and described as ‘poignant and atmospheric’ by the Guardian. Her second novel Moonchild: Voyage of the Lost and Found (2020), is the first in a new series of magical fantasy adventures, inspired by The Arabian Nights. You can follow her on Twitter @aishabushby.