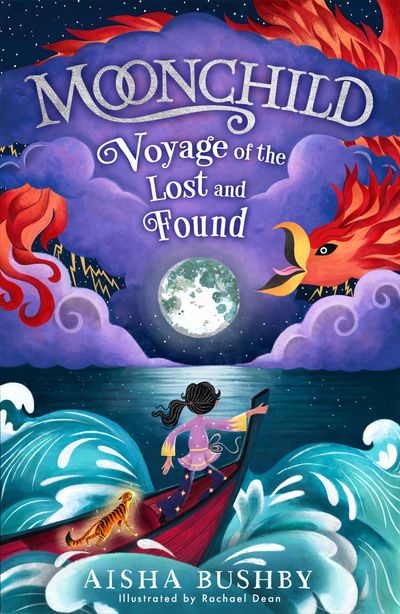 The first in a magical new middle grade series from a rising star author, perfect for fans of Kiran Millwood Hargrave and Michelle Harrison. Inspired by The Arabian Nights.

Twelve year old Amira has only ever known a life at sea with her sea-witch mothers. So when their ship is wrecked in a great storm, Amira is delighted to have an opportunity to explore land – accompanied by her best friend Namur – a jinn in cat form. Amira soon finds a boy who has a jinn like her, and learns that their spirit companions are connected to the mysterious storm that gets stronger each day.

When Namur goes missing Amira discovers she has to visit a magical place; a place where lost things can be found. But will Amira also discover her own destiny, and find out what it truly means to be a Moonchild?

Go on more magical adventures in Moonchild: City of the Sun, the stunning sequel to Moonchild: Voyage of the Lost and Found

Author: Aisha Bushby
Format: Paperback
Ageband: 9 to 12
Release Date: 06/08/2020
Pages: 288
ISBN: 978-1-4052-9321-1
Aisha Bushby is a writer who combines heartbreaking emotional stories and unforgettable characters with a sprinkling of magic. She was selected as one of only four previously unpublished authors in the Stripes anthology, A Change is Gonna Come, alongside writers such as Patrice Lawrence, Tanya Byrne and Nikesh Shukla. The anthology was awarded a YA Book Prize Special Achievement Award. Her debut novel, A Pocketful of Stars (2019), was nominated for the Carnegie Medal and the Branford Boase and described as ‘poignant and atmospheric’ by the Guardian. Her second novel, Moonchild: Voyage of the Lost and Found (2020) is a magical fantasy adventure inspired by Arabian Nights. You can follow her on Twitter @aishabushby.

‘Readers will be enchanted and will finish the book dreaming of adventures under sultry night skies.’Books for Keeps 06.08.2020 - -

‘This captivating adventure is full of magic, mystery and danger.’BookTrust 01.09.2020 -

Praise for A Pocketful of Stars: -

‘A gorgeous story of friendship and growing up' Cathy Cassidy -

'A wonderful adventure', The Week Junior -

”’If you like magic, myths and crazy adventures, then this is the book for you! It made me want to write my own stories too!” - - Emmy (aged nine) in First News