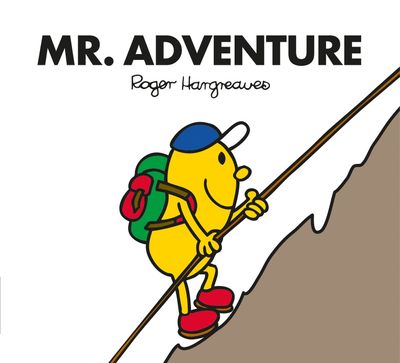 Mr Adventure loves going on holiday to exciting places that would make your hair stand on end. But this year he doesn’t have enough money to go on one of his wild adventures. He needs to get a job, but what job will be exciting enough for Mr Adventure?

Author: Adam Hargreaves
Format: Paperback
Ageband: from 3
Release Date: 08/02/2018
Pages: 32
ISBN: 978-1-4052-9084-5
It all started with a tickle. Roger Hargreaves’ son Adam asked him what a tickle looked like. In response, Roger drew a small orange man with extraordinarily long arms that could reach anywhere and tickle anyone. Mr Tickle was born and Mr Greedy, Mr Happy, Mr Nosey, Mr Sneeze and Mr Bump soon followed. The books were an instant hit and Roger went on to create many more Mr Men and Little Miss characters which have been delighting children and adults for generations.