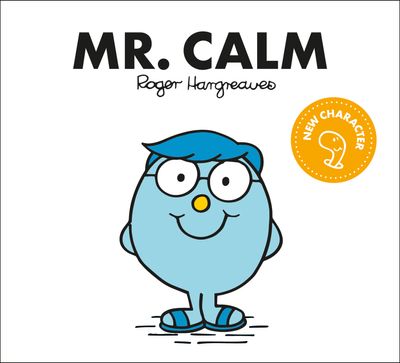 It’s time to meet Mr Calm, who is quite possibly the calmest person in the world. He appreciates the simple pleasures in life and nothing can upset or disturb him, which means he’s a calm head in a crisis. But unfortunately not all his friends approach life in the same way. Can Mr Calm help them to change their ways?

Fifty years after Mr Tickle, the very first Mr Men book was published, the public voted for the next two new characters from Little Miss Brave, Mr Calm, Little Miss Energy, Mr Brilliant and Little Miss Kind. A rather relaxed Mr Calm stayed true to his name and was calmly selected alongside Little Miss Brave, as one of the two most popular characters.

Author: Adam Hargreaves
Format: Paperback
Ageband: from 3
Release Date: 02/09/2021
Pages: 32
ISBN: 978-1-4052-9984-8
It all started with a tickle. Roger Hargreaves’ son Adam asked him what a tickle looked like. In response, Roger drew a small orange man with extraordinarily long arms that could reach anywhere and tickle anyone. Mr Tickle was born and Mr Greedy, Mr Happy, Mr Nosey, Mr Sneeze and Mr Bump soon followed. The books were an instant hit and Roger went on to create many more Mr Men and Little Miss characters which have been delighting children and adults for generations.