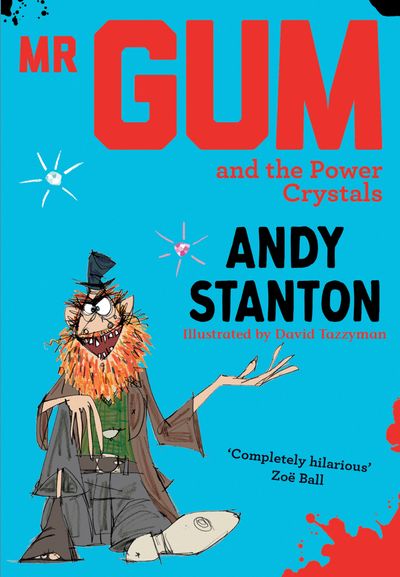 Mr Gum and the Power Crystals Can it really be true that there’s an ancient curse on the town of Lamonic Bibber? And you guessed it, that old roo-de-lally Mr Gum and his trusty sidekick Billy William the Third have something to do with it. But … our favourite heroes Polly and Friday and the gingerbread biscuit Alan Taylor (only 15.24 cm tall) are determined to save the town (sigh of relief).

Hang on to your heads and prepare to chuckle like a chipmunk as you’re whisked to the land of talking dogs, silly songs, Old Granny, and the best chase scene you’ve ever seen.

Mr Gum and the Power Crystals is the fourth book in the internationally best-selling series by Andy Stanton, which has won everything from the Blue Peter Book Award (twice) the Roald Dahl Funny Prize and the Red House Children’s Book Award.

Author: Andy Stanton, Illustrated by David Tazzyman
Format: eBook
Ageband: 7 to 11
Release Date: 01/11/2011
ISBN: 978-1-4052-5930-9
Andy Stanton studied English at Oxford but they kicked him out. Before becoming a children’s writer he was a film script reader, a market researcher, an NHS lackey, a part-time sparrow and a grape. He is best known for the hilarious, bestselling and award-winning Mr Gum series and has also written picture books, including Danny McGee Drinks the Sea. Andy lives in North London and likes cartoons, books and music (even jazz).David Tazzyman studied illustration at Manchester Metropolitan University. As well as illustrating the Mr Gum series, he has illustrated many picture books Eleanor's Eyebrows, You Can't Take an Elephant on the Bus, Michael Rosen's Jelly Boots, Smelly Boots and My Mum's Growing Down by Laura Dockrill. He lives in Leicester with his wife and three sons.