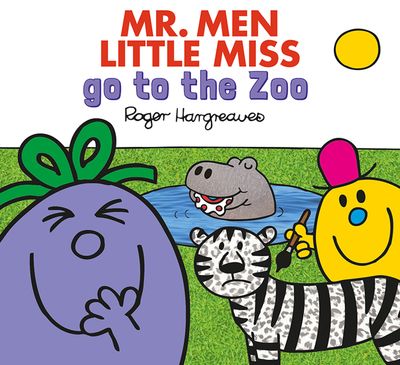 When the Little Miss Naughty decides to spend a day at the zoo, it’s not just the cheeky monkeys who are causing trouble! And to make things worse Mr Mischief is also there and determined to be even more mischievous than Little Miss Naughty!

The Mr. Men and Little Miss Every Day series takes Roger Hargreaves’ beloved characters on trips and activities that children will recognise from their own lives. All the stories have a ‘Where’s Walter’ feature with Walter the worm hiding in every book making for a fun and interactive reading experience for children aged two years and up.

Author: Adam Hargreaves
Format: Paperback
Ageband: from 3
Release Date: 08/02/2018
Pages: 32
ISBN: 978-1-4052-9072-2
It all started with a tickle. Roger Hargreaves’ son Adam asked him what a tickle looked like. In response, Roger drew a small orange man with extraordinarily long arms that could reach anywhere and tickle anyone. Mr Tickle, the first of the Mr Men, was born. Mr Tickle was soon joined by Mr Greedy, Mr Happy, Mr Nosey, Mr Sneeze and Mr Bump. The books were an instant hit and Roger went on to create many more Mr Men and Little Miss characters. What Roger really wanted was to make children laugh,which is probably why his own favourite character is Mr Silly.