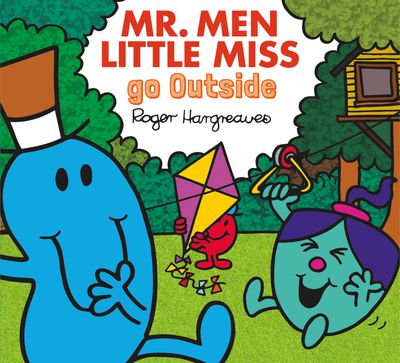 Join the Mr Men and Little Miss for lots of fun outside!

Mr Busy has been cooped up inside all winter long and now the weather has brightened up he can’t wait to get outside. There are kites to fly, a bike to ride and a treehouse to build, but the most fun will be had at a treetops adventure park with his friends, Little Miss Somersault, Mr Tickle, Little Miss Brave and Mr Bounce!

The Mr Men and Little Miss Every Day series takes Roger Hargreaves’ beloved characters on trips and activities that children will recognise from their own lives. All the Every Day Adventures have a ‘Where’s Walter’ feature with Walter the worm hiding in every story making for a fun and interactive reading experience for children aged two years and up.

Author: Adam Hargreaves
Format: Paperback
Ageband: from 3
Release Date: 28/04/2022
Pages: 32
ISBN: 978-0-7555-0411-4
Adam Hargreaves is the son of Roger Hargreaves who created the Mr. Men and Little Miss series. Adam was the inspiration for the series when, at the age of eight, he asked his father 'What does a tickle look like?' In response, Roger drew a figure with a round orange body and long, rubbery arms and Mr. Tickle was born. He was soon joined by Mr Greedy, Mr Happy, Mr Nosey, Mr Sneeze and Mr Bump. The books were an instant hit and Roger went on to create many more Mr Men and Little Miss characters. What Roger really wanted was to make children laugh,which is probably why his own favourite character is Mr Silly.