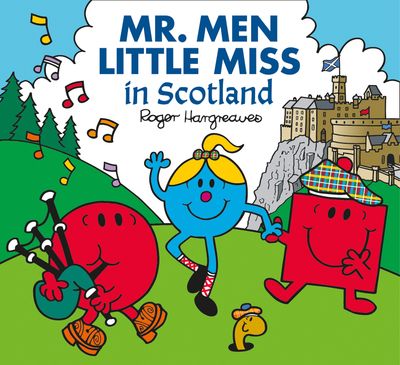 Mr Strong is taking part in the Highland Games in Scotland and on the way, him and his friends decide to take in the sights.

They all have different ideas about what to see on their tour – Little Miss Splendid wants to visit a Woollen Mill, Mr Snooty demands to see Edinburgh castle and Little Miss Greedy wants to try haggis! But will Mr Strong manage to win the competition to become ultimate Highland Games champion?

Author: Adam Hargreaves
Format: Paperback
Ageband: from 3
Release Date: 10/01/2019
Pages: 32
ISBN: 978-1-4052-9282-5
It all started with a tickle. Roger Hargreaves’ son Adam asked him what a tickle looked like. In response, Roger drew a small orange man with extraordinarily long arms that could reach anywhere and tickle anyone. Mr Tickle, the first of the Mr Men, was born. Mr Tickle was soon joined by Mr Greedy, Mr Happy, Mr Nosey, Mr Sneeze and Mr Bump. The books were an instant hit and Roger went on to create many more Mr Men and Little Miss characters. What Roger really wanted was to make children laugh, which is probably why his own favourite character is Mr Silly.