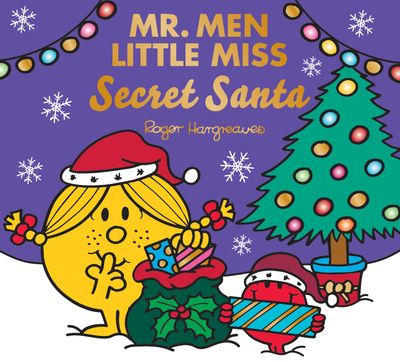 The Mr Men and Little Miss are giving each other secret Christmas presents!

Little Miss Sunshine thought it would be a fun idea for the Mr Men and Little Miss to be Secret Santas for each other. Mr Nosey didn’t think it was such a good idea as he likes to know everything! What will the friends gifts be and how will Mr Nosey cope with all the secrets?!

Mr Men and Little Miss Celebrations introduce children to all the exciting occasions that people celebrate including birthdays, Christmas, Halloween, Easter, sporting events … and even a trip to the moon. These colourful adventures will delight children of two years and upwards. Bold illustrations and funny stories make Mr Men and Little Miss the perfect story time experience

Author: Adam Hargreaves
Format: Paperback
Ageband: from 3
Release Date: 29/09/2022
Pages: 32
ISBN: 978-0-00-851051-0
It all started with a tickle. Roger Hargreaves’ son Adam asked him what a tickle looked like. In response, Roger drew a small orange man with extraordinarily long arms that could reach anywhere and tickle anyone. Mr Tickle was born and Mr Greedy, Mr Happy, Mr Nosey, Mr Sneeze and Mr Bump soon followed. The books were an instant hit and Roger went on to create many more Mr Men and Little Miss characters which have been delighting children and adults for generations.