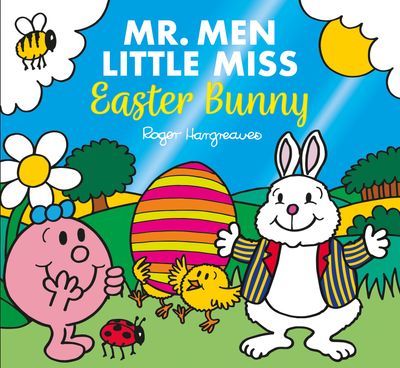 Have you ever met the Easter Bunny? Little Miss Tiny has and she knows exactly how he creates the right egg for the right person, but you’ll have to read the story to find out! Get ready for a spring tale with surprises galore and lots of chocolate.

With a shiny foiled cover you’ll want to peek inside!

Author: Roger Hargreaves
Format: Paperback
Ageband: from 3
Release Date: 03/03/2022
Pages: 32
ISBN: 978-0-7555-0394-0
Adam Hargreaves is the son of Roger Hargreaves who created the Mr. Men and Little Miss series. Adam was the inspiration for the series when, at the age of eight, he asked his father 'What does a tickle look like?' In response, Roger drew a figure with a round orange body and long, rubbery arms and Mr. Tickle was born. He was soon joined by Mr Greedy, Mr Happy, Mr Nosey, Mr Sneeze and Mr Bump. The books were an instant hit and Roger went on to create many more Mr Men and Little Miss characters. What Roger really wanted was to make children laugh,which is probably why his own favourite character is Mr Silly.