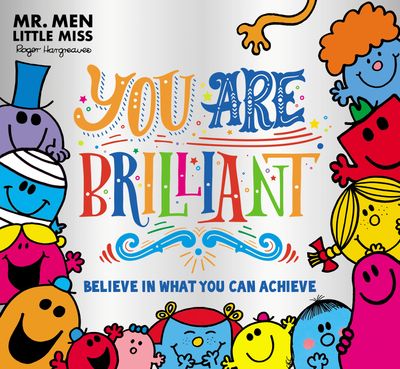 Mr. Men Little Miss: You are Brilliant: Believe in what you can achieve

You are never too young to know how brilliant you can become.

The MR. MEN and LITTLE MISS are all different. This book celebrates those differences and that whether you’re SMALL or TALL, NOISY or QUIET, SHY or SILLY, you can achieve amazing things by believing in yourself. You will always have the power to surprise people, just like the Mr Men and Little Miss who are so much more than their names.

No one can define how big you dream or how far you go. Be inspired and have confidence that you can help shape the world and make your mark. You are brilliant!

This positive, inclusive and inspiring book will help young children believe in their own strengths and abilities and that they have the power to make a difference to the world. The perfect book to give children confidence to become brave, kind and happy adults.

Author: Adam Hargreaves, Illustrated by Roger Hargreaves
Format: Paperback
Ageband: from 2
Release Date: 03/09/2020
Pages: 32
ISBN: 978-1-4052-9665-6
It all started with a tickle. Roger Hargreaves’ son Adam asked him what a tickle looked like. In response, Roger drew a small orange man with extraordinarily long arms that could reach anywhere and tickle anyone. The idea that a tickle could be a character in its own right sparked an idea in Roger’s mind. Roger was a successful copywriter but he wanted to do something that would enable him to work from home and spend more time with his four children. He wondered if he could make a living writing and illustrating children’s books so he wrote the first Mr Men titles: Mr Tickle, Mr Greedy, Mr Happy, Mr Nosey, Mr Sneeze and Mr Bump. The books were an instant hit and Roger went on to create many more Mr Men and Little Miss characters. What Roger really wanted was to make children laugh. Mr Silly was his favourite Mr Men story and, according to his family, encapsulates his humour most closely. Sadly Roger passed away in 1988, but his son Adam took over the series, introducing new characters and exciting new adventures. Roger once said, ‘I feel very happy to think that when the Mr Men and Little Misses are 100 years old, their readers will always be five.’

Mr. Men Little Miss: You are Brilliant: Believe in what you can achieve

You are never too young to know how brilliant you can become.