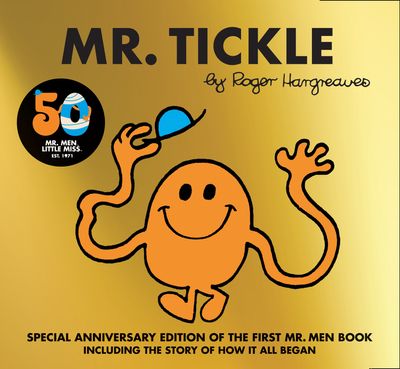 Enjoy the story that first introduced the Mr Men to the world in this special 50th anniversary edition!

Mr Tickle is small and round and has arms that stretch and stretch. Extraordinarily long arms, perfect for tickling!

In 1971 Mr Tickle was published, bringing fun, tickles and laughter to children everywhere. Now, 50 years later you can enjoy this special upsized edition of the classic story with a bonus new story about how it all began. The perfect gift for fans of the Mr Men.

Author: Roger Hargreaves
Format: Paperback
Ageband: from 2
Release Date: 07/01/2021
Pages: 40
ISBN: 978-1-4052-9981-7
Detailed Edition: With the Story of How it All Began edition
It all started with a tickle. Roger Hargreaves’ son Adam asked him what a tickle looked like. In response, Roger drew a small orange man with extraordinarily long arms that could reach anywhere and tickle anyone. The idea that a tickle could be a character in its own right sparked an idea in Roger’s mind. Roger was a successful copywriter but he wanted to do something that would enable him to work from home and spend more time with his four children. He wondered if he could make a living writing and illustrating children’s books so he wrote the first Mr Men titles: Mr Tickle, Mr Greedy, Mr Happy, Mr Nosey, Mr Sneeze and Mr Bump. The books were an instant hit and Roger went on to create many more Mr Men and Little Miss characters. What Roger really wanted was to make children laugh. Mr Silly was his favourite Mr Men story and, according to his family, encapsulates his humour most closely. Sadly Roger passed away in 1988, but his son Adam took over the series, introducing new characters and exciting new adventures. Roger once said, ‘I feel very happy to think that when the Mr Men and Little Misses are 100 years old, their readers will always be five.’

Enjoy the story that first introduced the Mr Men to the world in this special 50th anniversary edition!

Mr Tickle is small and round and has arms that stretch and stretch. Extraordinarily long arms, perfect for tickling!