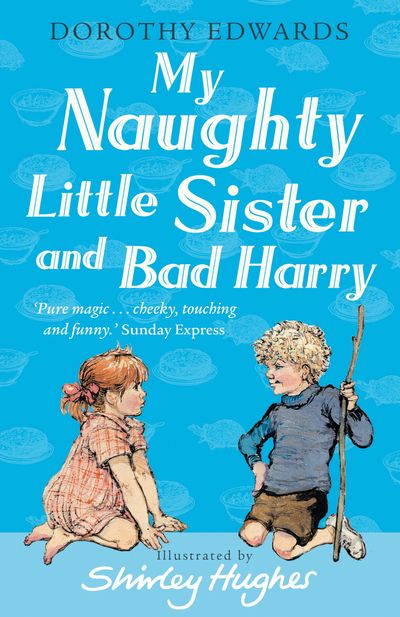 Here’s double trouble because my naughty little sister’s best friend, Bad Harry, is just as naughty as she is! They make secret friends with a mouse and feed it bacon and cheese, and they pretend to eat their bread crusts but hide them instead. Together they cause terrible mischief.

Author: Dorothy Edwards, Illustrated by Shirley Hughes
Format: Paperback
Ageband: from 5
Release Date: 02/08/2010
Pages: 144
ISBN: 978-1-4052-5336-9
Dorothy Edwards (1914–1982) based My Naughty Little Sister on her younger sister, Phyllis, and went on to write five books about her naughty little sister with wide acclaim. Dorothy became a household name and her stories were read and loved across the globe. She became a fixture of a radio show in the 1950s called Read with Mother and she also wrote for Playschool and Jackanory.Shirley Hughes was born in 1927. She has written and illustrated over 70 books, selling more than eleven million copies. In both 1977 and 2004 she won the Kate Greenaway Medal, and the Eleanor Farjeon Award in 1984. In 1999 she was awarded an OBE for services to children's literature and in 2000 was made a Fellow of the Royal Society of Literature. Shirley lives in London.

Here's double trouble because my naughty little sister's best friend, Bad Harry, is just as naughty as she is! They make secret friends with a mouse and feed it bacon and cheese, and they pretend to eat their bread crusts but hide them instead. Together they cause terrible mischief.