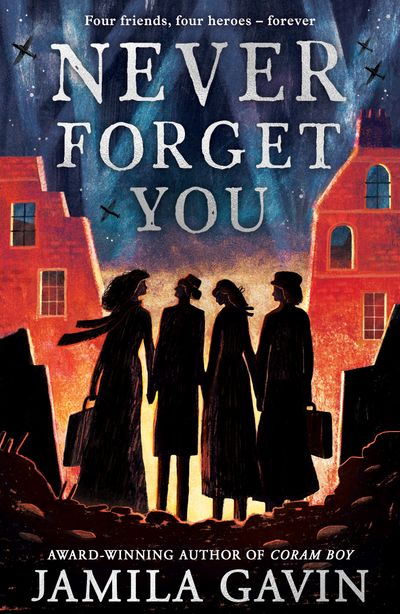 A stunning and heartbreaking new novel from Jamila Gavin, the bestselling and award-winning author of Coram Boy and The Wheel of Surya.

Gwen, Noor, Dodo and Vera are four very different teenage girls, with something in common. Their parents are all abroad, leaving them in their English boarding school, where they soon form an intense friendship. The four friends think that no matter what, they will always have each other. Then the war comes.

The girls find themselves flung to different corners of the war, from flying planes in the Air Transport Auxiliary to going undercover in the French Resistance. Each journey brings danger and uncertainty as each of them wonders if they can make it through – and what will be left of the world. But at the same time, this is what shows them who they really are – and against this impossible backdrop, they find new connections and the possibility of love.

Will the four friends ever see each other again? And when the war is over, who will be left to tell the story?

A heartbreaking and gripping story of hope, fear and unbreakable friendship, for readers of Code Name Verity and When the World Was Ours.

Author: Jamila Gavin
Format: Digital download
Ageband: from 11
Release Date: 07/07/2022
Pages: None
ISBN: 978-0-7555-0333-9
Jamila Gavin was born in Mussoorie, India, in the foothills of the Himalayas. With an Indian father and an English mother, she inherited two rich cultures which ran side by side throughout her life, and which always made her feel she belonged to both countries.The family finally settled in England where Jamila completed her schooling, was a music student, worked for the BBC and became a mother of two children. It was then that she began writing children’s books, and felt a need to reflect the multi-cultural world in which she and her children now lived.