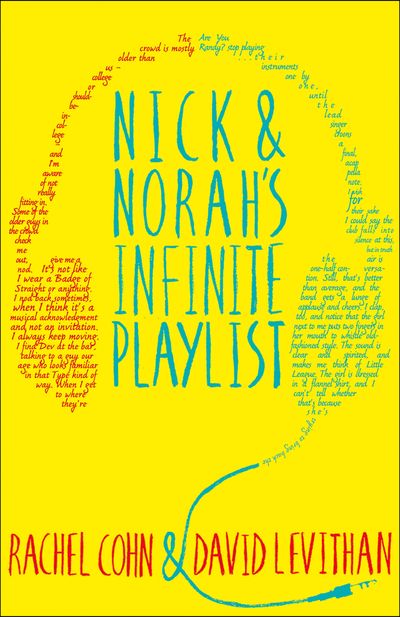 The sexy, funny roller coaster of a love story from David Levithan and Rachel Cohn, which inspired the beloved film starring Michael Cera and Kat Dennings.

Nick and Norah are both suffering from broken hearts. So when Nick sees the girl who dumped him walk in with a new guy he asks the strange girl next to him to be his girlfriend for the next five minutes.

Norah would do anything to avoid conversation with the not-friend girl who dumped Nick, and get over the Evil Ex whom Norah never quite broke up with. And so she agrees.

What follows is an epic first date between two people who are just trying to figure out who they want to be – and where the next great band is playing.

This story plays out over one unforgettable night in New York. One of the great YA novels about falling in love, for everyone who had their hearts broken by Rainbow Rowell’s Eleanor & Park or Jandy Nelson’s I’ll Give You the Sun.

David and Rachel’s other collaborations include Naomi and Eli’s No Kiss List and The 12 Days of Dash and Lily.

David Levithan is the New York Times best-selling author of Boy Meets Boy, Every Day, and Another Day. His many collaborations include Will Grayson, Will Grayson with Fault in Our Stars author John Green. Tiny Cooper from Will Grayson, Will Grayson, now has his own novel: Hold Me Closer: The Tiny Cooper Story. David’s latest collaboration with Rachel Cohn, The Twelve Days of Dash and Lily, was picked by Zoella for her Book Club with WHSmiths. David is also a highly respected children’s book editor, whose list includes many luminaries of children’s literature, including Garth Nix, Libba Bray and Suzanne Collins. He lives and works in New York.

Rachel Cohn was born in Maryland but now also lives in New York. Among her many YA novels are Gingerbread, Shrimp, and Cupcake.