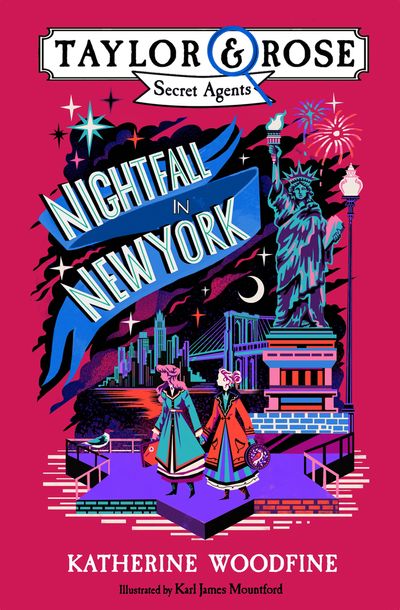 The fourth and final adventure in the brilliant Taylor & Rose series by bestselling author, Katherine Woodfine. For fans of The Sinclair Mysteries and Murder Most Unladylike series

Top secret agents, Sophie Taylor and Lil Rose have set sail to New York City on an elegant ocean liner, ready to face their enemies and settle old scores. These two brave friends will need all of their detective skills, courage and derring-do as they race against time to rescue a beloved friend and save the city – and its inhabitants – from destruction and certain death …

Author: Katherine Woodfine, Illustrated by Karl James Mountford
Format: eBook
Ageband: from 9
Release Date: 08/07/2021
ISBN: 978-0-7555-0127-4
Katherine Woodfine is a true champion of children’s literature. Until 2015 she was Arts Project Manager for Booktrust, where she project-managed the Children's Laureateship and YALC, the UK’s first Young Adult Literature Convention, curated by Malorie Blackman. She is part of the founding team at Down the Rabbit Hole, a monthly show for Resonance FM discussing children’s literature. Katherine blogs at followtheyellow.co.uk. She lives in Lancashire with her husband and daughter.

The fourth and final adventure in the brilliant Taylor & Rose series by bestselling author, Katherine Woodfine. For fans of The Sinclair Mysteries and Murder Most Unladylike series