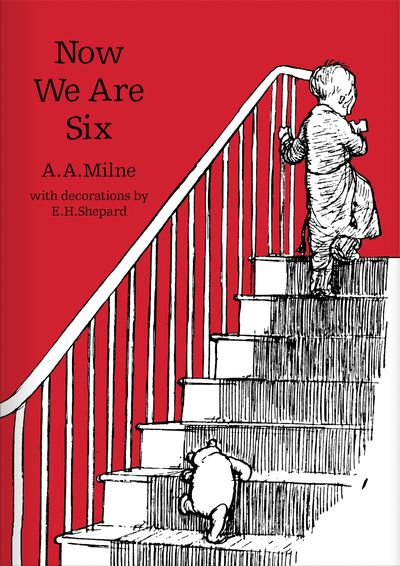 “But now I am Six, I’m as clever as clever. So I think I’ll be six now for ever and ever!”

Author: A. A. Milne
Format: Hardback
Ageband: 5 to 9
Release Date: 25/02/2016
Pages: 112
ISBN: 978-1-4052-8086-0
A.A.Milne was born in London in 1882 and became a highly successful writer of plays, poems and novels. He based Winnie-the-Pooh, Piglet and friends on the real nursery toys of his son Christopher Robin and published the first book of their adventures together in 1926. Since then, Pooh has become a world-famous bear, and Milne’s stories have been translated into seventy-two languages.E.H.Shepard was born in London in 1879. He was an artist, illustrator and cartoonist and went on to draw the original decorations to accompany Milne’s classic stories, earning him the name ‘the man who drew Pooh’.

”Named one of Quentin Letts” - best books - The Week

‘… a tome to cherish now and pass down through the generations for years to come.’, The Independent -