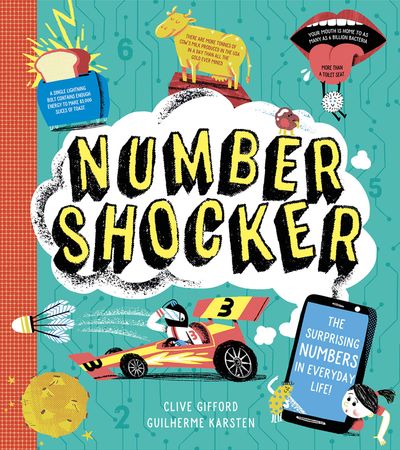 A colourful cross-curricular book for STEAM enthusiasts aged 6+, exploring a range of fascinating topics – from science and technology to animals and the environment. Perfect for budding David Attenboroughs and Greta Thunbergs!

Learn all about the world through a series of fascinating facts across a range of topical subjects, including the history of life on Earth, the electrifying power of lightning, and the troubling problem of pollution in the seas . . .

Did you know, the Earth started forming about 4.54 BILLION years ago. If you shrank all those years into one calendar year, then the first life on Earth appeared in February or March, and humans only turned up 24 MINUTES before the end of the year!

Over 1 MILLION plastic bottles are bought every minute, but fewer than one in ten bottles are recycled.

Tropical rainforests cover less than 3% of Earth’s surface yet are home to over HALF of all animal species. But the world’s rainforests and the things that live there are under threat . . .

Featuring bold illustrations, each turn of the page is a poster-worthy explosion of colours, making NUMBER SHOCKER the perfect gift for children with a thirst for knowledge about the world.

Author: Clive Gifford, Illustrated by Guilherme Karsten
Format: Paperback
Ageband: 6 to 9
Release Date: 28/04/2022
Pages: 32
ISBN: 978-1-4052-9972-5
Guilherme Karsten lives in Brazil. In 2010, he won a national contest for new children’s book illustrators, and he has been illustrating books since then. His work is now published in over 10 languages and his clients include Tate Publishing, Thames & Hudson and HarperCollins. He also develops projects for the fashion and graphic design industries. www.guilhermekarsten.comClive Gifford started writing books at the age of 16 and hasn’t stopped since! He has had over 150 books published, most of which are for children. His books have been nominated for or won Royal Society, School Library Association, Blue Peter, Smithsonian and TES awards. Clive lives in Manchester. www.clivegifford.co.uk

A colourful cross-curricular book for STEAM enthusiasts aged 6+, exploring a range of fascinating topics – from science and technology to animals and the environment. Perfect for budding David Attenboroughs and Greta Thunbergs!