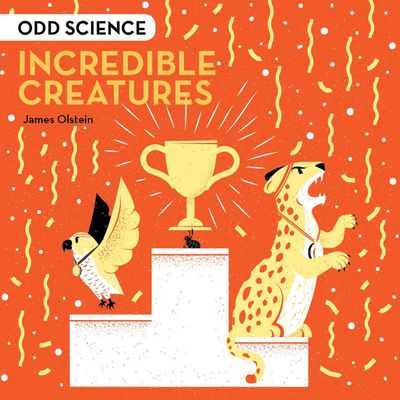 Odd Science: Incredible Creatures is filled with weird and wacky facts – read about the dinosaur that used camouflage, wonder at the penguins that ‘propose’ to each other with rocks and tell your friends that the dodo was actually quite smart!

Prepare to laugh, marvel and learn.

Scientists in Tokyo have trained pigeons to distinguish between art style. They can tell the difference between works by Picasso and Monet.

There are facts about sharks that listen to Death Metal, the amazing amount a hummingbird needs to eat, and strange creatures such as the ‘ghost’ octopus.

James Olstein beautifully illustrates these odd facts in a retro-inspired, quirky style. His designs aren’t meant to be taken literally, but you’ll laugh-out-load when you see a spider relaxing on a pool float and dinosaurs playing with a ball!

Being a geek has never been so cool.

Author: James Olstein
Format: ebook
Ageband: 9 to 11
Release Date: 07/02/2019
Pages: None
ISBN: 978-1-84365-439-1
James Olstein is an illustrator living in Philadelphia. He has illustrated for the BBC, Bob's Burgers, Monocle Magazine, Mental Floss, Scientific America, Sierra Magazine, economia, the Boston Globe and the National Constitution Centre. He has displayed his work at Spoke Gallery NYC, Galleries 1988 and Philadelphia Independents.He runs a successful blog called Illustrated Science, that has been featured in The Verge and Geekadelphia.