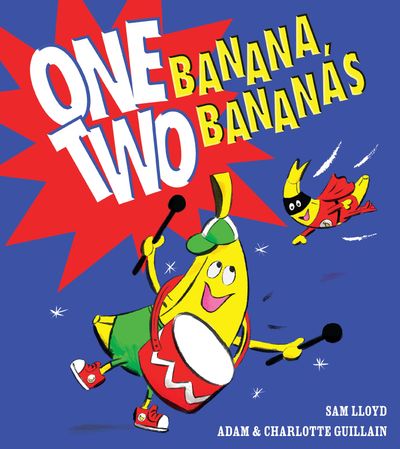 Learn to count to ten in this hilarious new rhyming picture book series from the bestselling authors of George’s Amazing Adventures and the illustrator of the award-winning Mr Pusskins!

Featuring bananas in pyjamas, a llama panorama, an inflatable banana boat and lots of other nonsense that children will love. With a catchy counting rhythm, this is a great way to help children learn to count in a fun, accessible way.

Author: Charlotte Guillain
Format: Paperback
Ageband: 3 to 5
Release Date: 21/04/2020
Pages: 32
ISBN: 978-1-4052-9418-8
Adam Guillain is a children’s writer, musician and a co-founder of Storytelling Schools. Charlotte Guillain taught English to air traffic controllers and nurses before deciding a career in publishing would endanger fewer lives. Since meeting in Zanzibar while working with Voluntary Services Overseas, they have written several picture books together including Supermarket Gremlins, School for Dads and the George's Amazing Adventures series.Sam Lloyd is the illustrator behind the bestselling Mr Pusskins series which won the Roald Dahl Funny Prize, the Booktrust Pre-School Award and was shortlisted for the V&A Illustration Award. Her novelty books include the Richard and Judy prize-winning Calm Down, Boris and Hello Dudley. Sam’s books have been translated into over 15 languages. Sam lives in Brighton with her son Ozzy and their ginormous ginger cat.